Invisible People: We Can Make Them Visible

Having moved between countries and cities throughout my childhood, I recall often standing alone at recess feeling as if I were invisible. In a very small way, I feel like I can relate to the hundreds of people feeling the powerlessness of invisibility in a society that does not see them.

While "underclass" invisibility is caused initially by systems of oppression, shame invariably leads these vulnerable individuals to perpetuate this depressed psychological and social state. "Shame involves the realization that one is weak and inadequate in some ways in which one expects oneself to be adequate. Its reflex is to hide from the eyes of those who will see one's deficiency, to cover it up," explains legal scholar Martha Nussbaum.

One who lacks basic needs often wishes not to be seen for fear of shame. This is made worse by our shame at seeing them and not taking action, and the further clouding of visibility that follows. As Nelson Mandela rose to become the first democratically elected state President of South Africa, a country shamed by a history of painful injustice, he shared that "As we are liberated from our own fear, our presence automatically liberates others." We need the courage to see and make seen the victims of injustice among us.

We have been granted the power to help make visible the invisible. We accomplish this by letting the vulnerable hiding in the shadows know every time we encounter them that they are recognized members of society, members in good standing even, and especially by letting the public know they exist by advocating for their rights and welfare.

Jewish law even demands not only that we see but that we be seen ("yireh, yai'raeh") in Jerusalem on the festivals (Chagigah 2a). This is training for the rest of the year that our eyes, and hearts, be open to see those who are unseen. Connecting and supporting the unseen is not a distraction from the tradition but its actualization.

One of the primary goals of Jewish spiritual life is to see beyond the physical, to sanctify the unseen, and to elevate matter to a higher plane. The Maggid of Mezritch, the great Chassidic master, helped to introduce us to the idea of "yesh me'ayin"—creation out of nothing—to mean that in helping something come into existence that previously did not exist, or helping something be seen that previously was unseen, it is like we are emulating the very creation of the universe.

Greater than lending money or giving tzedakah to a poor individual, the rabbis tell us, is providing partnership (Shabbat 63a). Our charge is to join the invisible in solidarity and partnership: Let us help make their voices heard and their humanity seen.

Some of the most terrifying times in my own life have been when I didn't really feel like I existed; in these moments, I didn't feel acknowledged by the world, let alone appreciated or loved.

I have been fortunate to have the support to get through those times. I would venture to say I am not alone in having had these feelings, neither am I alone in recognizing the crucial role played by friends and family members to remind me of my visibility and humanity. Let us be those friends, let us be those family members, and let us be those advocates for those who have none. May we be blessed with the good sight to see the unseen, and the vision to increase their visibility in our blessed nation.

Practices From the Inside Out: Climbing Toward Hope
Greg Richardson
4 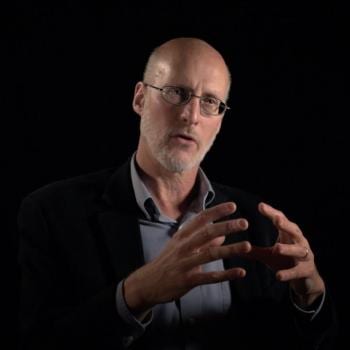 Cruciform Scripture: Interviews with Contributors—Steve Fowl on Paul and Gift
Nijay Gupta
Get Patheos Newsletters
Get the latest from Patheos by signing up for our newsletters. Try our 3 most popular, or select from our huge collection of unique and thought-provoking newsletters.
From time to time you will also receive Special Offers from our partners that help us make this content free for you. You can opt out of these offers at any time.
see our full list of newsletters
Editor's picks See all columnists