"The gods are just, and of our pleasant vices
Make instruments to plague us."
-- William Shakespeare, King Lear

One of the great strengths of William Shakespeare's tragedies is their ability to spotlight some of humanity's greatest foibles and weaknesses. These failings are often extremely exaggerated, yet it is precisely their unrealistic presentations that render them so effective, bringing man's flaws into sharp relief for those of us who must struggle with them on a smaller, more plausible scale. In my limited experience, the most hard-hitting of the great tragedies has always been "King Lear," and a recent viewing of Trevor Nunn's 2008 adaptation reminded me of just how timeless and relevant it remains.

Based on the wildly popular stage production that premiered in Stratford-upon-Avon in 2007, Nunn's film is built around the magnetic, mercurial, almost unhinged performance of Sir Ian McKellen. Yet its success is as much a result of its superb supporting cast as the theatrics of its most celebrated thespian.

Here's a simple summary of the play: moments before dividing his fortune equally amongst his three daughters, King Lear orders each to publically express their love for him. Suspecting that their inheritances may hang in the balance, the two eldest vie with one another in proclaiming their devotion in the most insincere and extravagant of terms, and each receive a third of the kingdom for their troubles. But when Cordelia, his youngest and most beloved daughter, refuses to participate in her sisters' deceit, the king flies into a rage. He angrily denounces her, publically humiliating her before her suitors, the princes of Burgandy and France. Not content with this petulant demonstrate, he makes his disapproval crystal clear by irrevocably distributing her fortune (and his remaining regal power) amongst her sisters. Lastly, he banishes his most faithful advisor—the good Lord Kent—for daring to speak up in her defense, unwittingly guaranteeing his eventual destruction.

Adrift on the ensuing sea of intrigue without the sure rudder of Kent's advice or the anchor of Cordelia's love, the aging monarch soon discovers that the honeyed words of his daughters concealed a much sharper purpose. Arriving at the castle of each in turn, he is humiliated, stripped of his already-meager entourage, and ignominiously consigned to the darkness and cold outside their gates. The noble Kent refuses to desert his master in his time of greatest need, risking disgrace and death to return to the king's side. But his loyalty is no match for the destructive whirlwind that awaits Lear and all those faithful to him. The two sisters' myopic obsession with achieving their goals no matter the cost leaves a trail of death and destruction, and the story ends in the finest Shakespearean Scorched-Earth tradition, the ground littered with the bodies of heroes and villains alike.

The play is an embarrassment of thematic richness. Is Cordelia's stubborn refusal to "guild the lily" when the merest drop of embellishment would win her the day something to be praised, or is it a warning on the dangers of needlessly drawn battle lines? Is Lear's descent into madness genuine, or is the old man merely dodging his role in the devastating wounds he has inflicted on himself and his loved ones? How powerful is it that the moral blindness of the Earl of Glouchester is only lifted once he suffers genuine physical blindness? Yet the aspect of Lear's story that has always resonated most with me—the one most appropriate as we draw near to Lent's final days—is its exploration of the dangerous power of flattery and the way we all pursue the deadening effects of praise and comfort, no matter how disingenuous they may be.

Lear is blind to the dishonesty of his elder daughters; the film's most tragic irony is the obviousness of their sycophancy to all but Lear himself. Far too accustomed to the flowery insincerity that is heaped upon him at every turn, he is so stung at Cordelia's unvarnished (even blunt) expressions of affection that he quickly deprives himself of the only two people who would willingly place his needs before their own. Despite Kent's attempts to defend her from the king's rising madness—"Thy youngest daughter does not love thee least; nor are those empty-hearted whose low sound reverbs no hollowness"—Lear's violent reaction manifests the constant stroking of his ego to which he has grown so accustomed. Rather than growing wise in his old age, he has grown softer and more self-indulgent; he would rather be flattered than hear the truth.

None of us would knowingly place ourselves in a position as extreme as Lear's, embracing or banishing one's family on the strength (or weakness) of their fawning. Yet in a subtle way, we are all susceptible to Lear's fatal weakness, often giving more weight to the opinions and suggestions of those who praise us than to those whose words are designed to help us grow, but may sting a bit, as well. Demanding protestations of love as a prerequisite for acceptance, and measuring out the size of our rewards in conjunction with their avowals is far more common than we would care to admit, and who among us can honestly say that we bear criticism as well as we relish praise? 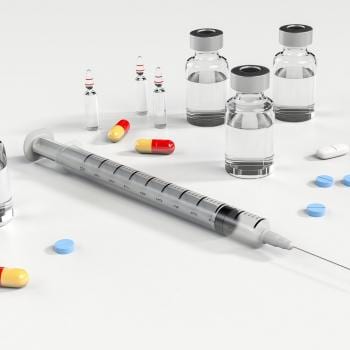 Ethical Vaccines Are A Real Need
William Hemsworth
Get Patheos Newsletters
Get the latest from Patheos by signing up for our newsletters. Try our 3 most popular, or select from our huge collection of unique and thought-provoking newsletters.
From time to time you will also receive Special Offers from our partners that help us make this content free for you. You can opt out of these offers at any time.
see our full list of newsletters
Editor's picks See all columnists