There is a saying attributed to Saint Francis of Assisi: "Preach the gospel; if necessary, use words."

Growing up, the example my parents set for me of faith and their personal relationships with God planted a seed within me. I really don't remember either of them "preaching," they just lived out their faith in their ordinary daily lives. I know that I was observing even when I was too small to understand it all.

When I would ride along with my mom on errands, sometimes she would pull into the church parking lot so we could go inside to "make a little visit," as she called it. We were never there long, but I have vivid memories of spending a few minutes in the quiet church with my mom and kneeling with her as we prayed. Of course, prayer can be lifted up anywhere, but those "little visits" are a special memory of her.

During Lent, we would spend a little longer walking around the church stopping for a couple of minutes at each of the Stations of the Cross; I would take in the scenes of Jesus' Passion and be so moved by the images! I'm not sure how old I was when I realized what they meant, but I know that very early on, they made an impression on me. I knew the last of the stations showing the crucifixion and Jesus being laid in the tomb wasn't the end of the story—that was why Easter was so glorious.

As I grew up, especially during difficult times in my own life, I was able to meditate on Jesus' passion in a personal way through those grounding experiences.

When Ed and I made a pilgrimage to Rome, last May, we were so moved and humbled to climb the Scala Sancta (Holy Steps) on our knees. They are widely held to be the stairs of the praetorium of Pontius Pilate. When we reached the top, Ed went off to take a few pictures, and I sat on a bench, reflecting that I was perhaps only a short distance from where Jesus had been condemned to death. I imagined our Lord with the horrible crown of thorns piercing his head and blood running down his bruised and swollen face; his clothing sticking to the drying blood from his scourging, like a gauze bandage that has been soaked through with blood, and adhering to the skin.

As we had stood at the bottom of the steps with the sizable group of those waiting our turn to begin our climb, I thought of the crowd that had stood 2000 years ago crying out, "Crucify him!" I had to put myself into that scene because my sins were just as responsible for what he went through.

"If anyone wants to be a follower of mine, let him renounce himself and take up his cross every day and follow me..." (Luke 9: 23). Jesus embraced his cross for the sake of our redemption and out of his great love for us.

I admit that so often I resist taking up my little daily toothpick-sized crosses. When I was losing my sight, I had prayed that cup might pass me by, but when I was finally able to accept it, and then give it back to God, he gave me the grace to carry it; only with his strength was it possible.

Jesus was so weak from being up all night in terrible agony in the garden. He had been horribly beaten and lost so much blood. When I was going through the difficult health issues prior to my last kidney transplant, my hemoglobin dropped into the 5's, and each transfusion would build me up a little, but with the kidney failure it would quickly drop again. I had to have 13 blood transfusions over 15 months. I even stopped carrying a purse because it seemed too heavy to hold.

How did he manage? How did he carry his heavy cross through the rugged, uneven streets of Jerusalem, under such brutal conditions? I would think about it, in my sickness, in the times when it was difficult to put one foot in front of another, just to walk from the car into the hospital for treatment. His example upheld and inspired me; Jesus had no inspiration to turn to. He had nothing but his love, and his willingness to be the Lamb.

I am thankful that I had parents and others who modeled the Christian life for me. Not that they were perfect—none of us are, but their lives taught me the way I should go, the Gospel Way. They laid a foundation, and even if I wandered from time-to-time, I always found my way back to that solid footing.

As parents and grandparents even when we don't realize it, we are being watched. Perhaps the best lesson we can give to those little eyes paying attention is this one: in our imperfections, we seek out God's help, and his forgiving grace, which is always offered.

That was probably one of the best lessons my parents ever taught me. No words needed.

The Era of Big Government Is Back
Gene Veith
2 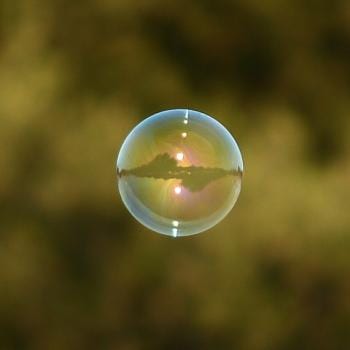 Monastic Strategies: Living One Moment at a Time
Greg Richardson
4