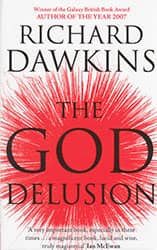 Dawkins examines God in all his forms, from the sex-obsessed tyrant of the Old Testament to the more benign (but still illogical) Celestial Watchmaker favored by some Enlightenment thinkers. He argues that religion fuels war, foments bigotry, and abuses children, buttressing his points with historical and contemporary evidence. The God Delusion makes the case that belief in God is not just wrong but potentially deadly. Dawkins offers insight into the advantages of atheism to the individual and society, not the least of which is a clearer, truer appreciation of the universe's wonders than any faith could ever muster.

Sam Harris, The End of Faith

The End of Faith delivers a startling analysis of the clash of faith and reason in today's world. Harris offers a vivid historical tour of mankind's willingness to suspend reason in favor of religious beliefs, even when those beliefs are used to justify harmful behavior and sometimes-heinous crimes. While warning against the encroachment of organized religion into world politics, Harris also draws on new evidence from neuroscience and insights from philosophy to explore spirituality as a biological, brain-based need. He calls on us to invoke that need in taking a secular humanistic approach to solving the problems of this world.

Daniel Dennett, Breaking the Spell: Religion as a Natural Phenomenon

For all the thousands of books that have been written about religion, few until this one have attempted to examine it scientifically: to ask why—and how—it has shaped so many lives so strongly. Daniel C. Dennett charts religion's evolution from "wild" folk belief to "domesticated" dogma. Not an antireligious screed but an unblinking look beneath the veil of orthodoxy, Breaking the Spell will be read and debated by believers and skeptics alike.

Rich with such iconic figures as Thomas Jefferson, Abraham Lincoln, Thomas Paine, and the once-famous Robert Green Ingersoll, Freethinkers restores to history the passionate humanists who struggled against those who would undermine the combination of secular government and religious liberty that is the glory of the American system.

What are the arguments for and against religion and religious belief? Can there be a clear, full statement of these arguments that once and for all will show what is at stake in this debate? Is there a worldview and a code of life for thoughtful people—those who wish to live with intellectual integrity, based on reason, evidence, and a desire to do and be good—that does not interfere with people's right to their own beliefs and freedom of expression? In The God Argument, Anthony Grayling offers a definitive examination of these questions.

Greg Epstein, Good Without God: What a Billion Nonreligious People Do Believe