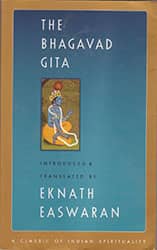 In this best-selling and expanded edition of the most famous—and popular—of Indian scriptures, Eknath Easwaran contextualizes the book culturally and historically, and he explains the key concepts of Hindu religious thought and the technical vocabulary of yoga. With his clear and simple translation, chapter introductions, notes, and glossary, Easwaran conveys the poetry, universality, and timelessness of the Gita's teachings.

Sanjay Patel brings to life Hinduism's most important gods and goddesses in fun, full-color illustrations, accompanied by short, lively profiles. The stories cover everything from love and jealousy to petty grievances and epic battles. Find out why Ganesha has an elephant's head and why Kali, the Goddess of Time, is known as "The Black One."

In this abridged version of the Indian classic, R.K. Narayan tells the sweeping tale of abduction, battle, and courtship played out in a universe of deities and demons. Narayan employs the skills of a master novelist to re-create the excitement he found in the original. A luminous saga made accessible to new generations of readers, the Ramayana can be enjoyed for its spiritual wisdom, or as a thrilling tale of ancient conflict.

The role of the visual is essential to Hindu tradition and culture, but many attempts to understand India's divine images have been laden with misperceptions. Darsan, a Sanskrit word that means "seeing," is an aid to our vision, a book of ideas to help us read, think, and look at Hindu images with appreciation and imagination.

This book is the culmination of more than a decade's work from Harvard scholar Diana Eck. The book explores the sacred places of India, taking the reader on an extraordinary journey through the beliefs and history of this rich and profound place, as well as providing a basic introduction to Hindu religious ideas and how those ideas influence our understanding of the modern sense of "India" as a nation.

In portraits of people we might otherwise never know, William Dalrymple distills his twenty-five years of travel in India to explore the challenges faced by practitioners of traditional forms of faith in contemporary India. Together, these tales reveal the resilience of individuals in the face of the relentless onslaught of modernity, the enduring legacy of tradition, and the hope and honor that can be found even in the most unlikely places.

An engrossing and definitive narrative account of history and myth, The Hindus offers a new way of understanding one of the world's oldest major religions. This groundbreaking work by one of the world's leading Sanskrit scholars elucidates the relationship between recorded history and imaginary worlds, the inner life and the social history of Hindus.