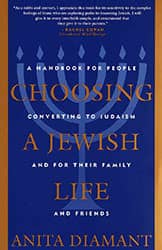 Married to a convert herself, Anita Diamant provides advice and information that can transform the act of conversion into an extraordinary journey of self-discovery and spiritual growth. Diamant anticipates all the common questions, doubts, and concerns, and provides a comprehensive explanation of the rules and rituals of conversion.

Widely recognized as one of the most respected and indispensable reference books on Jewish life, culture, tradition, and religion, Jewish Literacy covers every essential aspect of the Jewish people and Judaism. Telushkin discusses everything from the Jewish Bible and Talmud to Jewish notions of ethics to antisemitism and the Holocaust.

A landmark reference work, Essential Judaism is a one-volume guide to the religious traditions, everyday practices, philosophical beliefs, and historical foundations of Judaism. Editor George Robinson has created the accessible compendium that he sought when he rediscovered his Jewish roots as an adult.

Conversion to Judaism provides information, advice, and support for individuals contemplating conversion to Judaism, as well as those who have converted and the families affected by this decision. With sensitivity and compassion, Epstein offers an informative volume that warmly welcomes the newcomer to Judaism.

James Kugel, On Being a Jew

Composed as a meandering dialogue between a wily Syrian-Jewish banker and an American graduate student of literature, this engaging book explains all the basic beliefs and practices of Judaism—teachings on intermarriage and conversion, keeping the Sabbath, prayer and Torah, midrash and mitzvot, and God's presence in the world. On Being a Jew is an eloquent reflection on Judaism's deepest theme: living life as a way of serving God.

Sixty-two of the most accomplished Jews in America speak intimately about how they feel about being Jewish. In unusually candid interviews, celebrities ranging from Sarah Jessica Parker to Larry King reveal how resonant, crucial, or incidental being Jewish is in their lives. The connections they have to their Jewish heritage range from hours in synagogue to bagels and lox; but every person speaks to the weight and pride of their Jewish history, the burdens and pleasures of observance, and the moments they've felt most Jewish (or not).