The reconstructionist Pagan traditions—groups that draw their theology and practice from the mythology and folkways of a specific pre-Christian culture rather than from Wicca—emerged in the '80s and '90s. Most followers of the heathen (Germanic) traditions don't think of themselves as belonging to an Earth Religion in the sense of consciously deifying Gaia, but rather see humans as part of a system that includes the gods, the giants (beings more directly associated with natural phenomena, such as frost or fire or mountains), and a host of lesser beings connected to specific locations or features in a landscape. For many of our ancestors, getting along with the landwights who govern the fertility of the fields was more important than connecting with the gods. The closest that heathen mythology comes to Elemental Earth is the Scandinavian Jordh, mother of Thor. The Continental Germanic Nerthus, who is often honored as an Earth goddess like the Greek Demeter, is a deity who helps humans get food from the earth rather than Earth Herself.

When I began to seriously study Germanic religion in the early '90s, I realized that the story of Ragnarök offered a different and potentially compelling way to look at environmental issues in general and climate change in particular. As described at the end of Völuspá (in the Elder Edda) and in Gylfaginning (the Younger Edda), Ragnarök—the "final destiny of the divine powers"—is a series of cataclysms in which civilization crumbles, the current ecosystem is destroyed, and the armies of the gods and the giants battle to mutual destruction, after which a new world is born. In popular culture, this has been cast as a fight between good and evil, but a closer examination shows that the jotnar (giants) are the ancestors and cousins of the gods. They are elemental beings who do not interact directly with people, and like any power of nature, whether they are good or bad (from the human point of view) depends on where you are at the time.

Many cultures have the concept of Earth Ages. We know that the planet has had many climates and ecosystems, lasting a billion years or more. In geological time, our current Age has only been going on for a bit over two million years. Humans have always suffered during natural disasters, but even when a given community was destroyed, the ecosystem recovered. In the context of Norse mythology, Ragnarök can be interpreted as the destined end of the Age in which humanity and its gods evolved. If this period is like those that preceded it, it ought to last for several million more years.

When I watched the flames of the 1987 Oakland firestorm march down the ravines toward my home, I sensed a voracious fury that I identified with the Sons of Surtr, the jotnar of fire who at Ragnarök will lead the attack on the gods. Wildfires are a constructive part of the California ecosystem, but this fire was out of balance, fueled by brush that in earlier times would have been kept down by more frequent smaller burns. Today, we personify the destructive superstorms and recognize them as enemies. They may not have consciousness, but they do have identities. Whatever happens, the planet will not be destroyed, but it is becoming increasingly possible that human activities may upset the balance beyond the ability of the current ecosystem to recover. Personally, I see Ragnarök beginning when only the giants/natural forces that are destructive and unbalanced remain.

Given the probability of drastic changes, what counsel can heathen lore provide? Although an increasing awareness of our need to work with the land spirits has moved many heathens to adopt Green practices or move to the country, climate change, as such, has not been a major focus of heathen dialogue.

However, the Eddas and sagas were written by people who lived in a harsh environment and had many enemies. Heathen virtues emphasize courage and perseverance—good ideals for hard times. The old tales recognize that the hero does not always triumph. What matters is how you live.

Recycling, restoring, and regulating are all ways to fight for the world we know. Building strong communities lays the foundation for survival. Whether the impending crisis is a call to arms, a prequel to Ragnarök, or the herald of a return to a post-industrial world that will be as challenging as the one our ancestors knew, as a heathen, I am called to stand with the gods and fight as long and hard as I can. 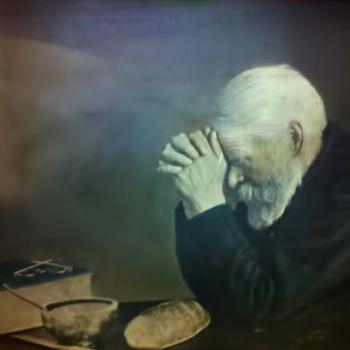 The God Delusion, or How I Reconcile My Faith With My Degree
Jim Coppoc
2

This Pandemic Is A Test: But Maybe Not How You Think
Erin Wathen
3

Sorry, "Let's Let Granny Die" Is A Straw Man
Jane the Actuary
Get Patheos Newsletters
Get the latest from Patheos by signing up for our newsletters. Try our 3 most popular, or select from our huge collection of unique and thought-provoking newsletters.
From time to time you will also receive Special Offers from our partners that help us make this content free for you. You can opt out of these offers at any time.
see our full list of newsletters
Editor's picks See all columnists