An Insatiable Appetite for Violence

I'm headed home from work. The traffic is notably worse than usual, possibly due to the heavy rain. Then, in the distance ahead, I see the flashing blue and red lights. I assume there's been a wreck. As I approach the scene of the accident, I notice every car slows down in what seems to be an attempt to see the wreckage, the bodies draped with black plastic still lying on the road, awaiting another ambulance that will carry the dead to a hospital or the morgue.

"Breaking News …" flashes across my television screen—"Viewer discretion advised …"—Video is shown of children fleeing a school where a disturbed young student has opened fire inside the school corridors, killing and massacring our children.

"Breaking News …" flashes across my television screen—Scene after scene of people running for their lives, billowing waves of clouds of soot and debris closing in on them. Fire trucks, police cars, ambulances rush to the site of the disaster. Bodies fall from building windows—suddenly another explosion—moments of silence and disbelief—the violence and devastation is incomprehensible.

"Breaking News …" flashes across my television screen—They were five and six years old, slaughtered and ripped apart by the excessive firepower of the automatic weapon. The unanswered question remains. "Why?"

"Breaking News …" flashes across my television screen—"Viewer discretion advised …"—Video is shown of children being lifted from rooftops while bodies of friends and relatives, parents and grandparents float swollen and distended throughout the flooded neighborhood. A supervising engineer at the pump station in New Orleans had warmed that if it's a category 4 or above, the levies won't hold, the pumps won't pump fast enough.

"Breaking News …" flashes across my television screen—"The President has been shot!" Over and over again, every channel you set your dial to, the black and white video is repeated and repeated until the images of the open convertible and the wife, bent over his destroyed body, covered in blood, leaves an indelible impression in our minds—forever.

"Breaking News …" flashes across my television screen—Riots erupt in Washington, D.C., after news of the assassination of Rev. Martin Luther King. Fires blaze and the violence is uncontainable. Grief and anger take hold.

She crouches in the dark corner of her closet. She doesn't breath. She remains hidden. If she is discovered it will be more brutal than the last attack. The children cry.

"It's only 23 cents for every dollar," she explains. "But for me and my children, an additional 23 cents means the difference between paying my rent, or my children and me being on the street. Why does Mr. Jones, who does the same job I do, and has the exact same education and training I do, get paid 23 cents more for every dollar he makes than I get paid? My children are hungry."

And the Bible says,

the priest shall take holy water in an earthen vessel, and take some of the dust that is on the floor of the tabernacle and put it into the water. The priest shall set the woman before the Lord, dishevel the woman's hair, and place in her hands the grain-offering of remembrance, which is the grain-offering of jealousy. In his own hand the priest shall have the water of bitterness that brings the curse. Then the priest shall make her take an oath, saying, "If no man has lain with you, if you have not turned aside to uncleanness while under your husband's authority, be immune to this water of bitterness that brings the curse. But if you have gone astray while under your husband's authority, if you have defiled yourself and some man other than your husband has had intercourse with you"—let the priest make the woman take the oath of the curse and say to the woman – "the Lord make you an execration and an oath among your people, when the Lord makes your uterus drop, your womb discharge; now may this water that brings the curse enter your bowels and make your womb discharge, your uterus drop!" And the woman shall say, "Amen. Amen." (Num. 5:17-27)

We are a people of violence. Women continue to be violated by a political system that denies them equal pay and reproductive and health rights. Our religious institutions deny women an equal presence in faith language, doctrines, hymns, and liturgies. Our children remain deprived of quality education unless you have the money, lots and lots of money.

Corporations seem not to care about the violence they cause in American society by blind pursuit of profit. Preachers instill fear in the hearts of their congregants if they refuse to accept Jesus Christ as their Lord and Savior, condemning them to eternal hell and damnation.

We are feverish with our obsessions to seek a glimpse of the carnage, the violence. Make no mistake; we are a violent people with violent taste and appetites. We feed on violence through news and entertainment as if it were manna from heaven. So, why don't you answer the question: Can violence be redemptive?

Timing Your Pregnancy To Get Specific Zodiac Signs Is A Thing Now
David G. McAfee
2

Should Religion Go Extinct with the Dinosaurs?
Ted Peters
3 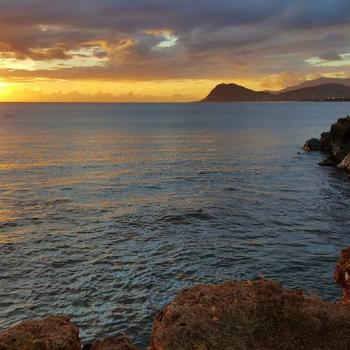 Health in Their Navel and Marrow to Their Bones Word Study
Delisa Hargrove
About
Get Patheos Newsletters
Get the latest from Patheos by signing up for our newsletters. Try our 3 most popular, or select from our huge collection of unique and thought-provoking newsletters.
From time to time you will also receive Special Offers from our partners that help us make this content free for you. You can opt out of these offers at any time.
see our full list of newsletters