Is There a Constitutional "Wall of Separation" Between Church and State? 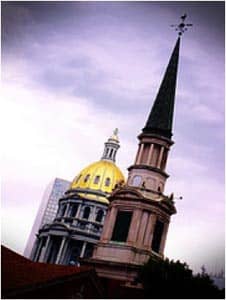 The phrase "wall of separation" is not in the United States Constitution. It is most commonly known as the wording used by Thomas Jefferson in his 1802 letter to the Danbury Baptist Association, which was a reply to the letter the Baptists had sent regarding their status as a minority religion. In it they complained that their freedom to practice their beliefs were only begrudgingly admitted by the government rather than being recognized as an essential right: "what religious privileges we enjoy (as a minor part of the state) we enjoy as favors granted, and not as inalienable rights; and these favors we receive at the expense of such degrading acknowledgements as are inconsistent with the rights of freemen."

In reply, Jefferson returns to the First Amendment of the Bill of Rights when he writes:

Believing with you that religion is a matter which lies solely between Man & his God, that he owes account to none other for his faith or his worship, that the legitimate powers of government reach actions only, & not opinions, I contemplate with sovereign reverence that act of the whole American people which declared that their legislature should "make no law respecting an establishment of religion, or prohibiting the free exercise thereof," thus building a wall of separation between Church & State.

Jefferson suggests this wall of separation both to protect the government from the manipulations of any religious group and to protect the citizens from the machinations of a government that favored any one religion. The political-religious conflict in Great Britain in the 17th century, and the sprawling political strife that resulted through the next century made early American citizens wary of any formal alliances between the government and religious bodies.

The United States Courts, at both the federal and state level, have over the last two centuries heard numerous cases that probe the contemporary applications of the First Amendment. In weighing the interpretation of the separation between Church and State, these courts have reviewed such issues as prayer in schools, the posting of the Ten Commandments in public places, and the phrase "under God" in the pledge of allegiance.

In general, the angle of complaint over the last few decades in regard to the separation of Church and State has been from those protesting the presence of religious language or values in public dialogue or arenas. Most recently, however, the angle of complaint has shifted to suggested restrictions on private religious beliefs, as evidenced in the comments of some 2012 presidential candidates about the role of Muslims in the government.

"The Constitution and Religion"

"A Case for a Christian America" (John Fea, Patheos.com)

E.J. Dionne and John J. DiIulio, eds., What's God Got to Do with the American Experiment? (Brookings Institution Press, 2000)

Noah Feldman, Divided by God: America's Church-State Problem - and What We Should Do About It (Farrar, Straus, Giroux, 2006)