Is President Obama Christian or Muslim? 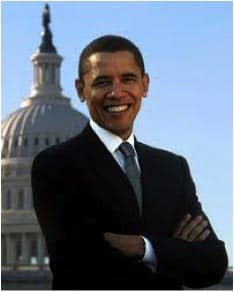 Barack Obama's candidacy and presidency have been dogged by many questions about his religious beliefs. Though his American mother (Ann Dunham) was nominally Christian, and his Kenyan father (Barack Obama, Sr.) was raised Muslim, neither practiced a faith nor passed one on to Obama. Obama's father left the home when he was very young and had little contact with him after that. Obama's Indonesian stepfather (Lolo Soetoro) was Muslim but, according to Obama, it was a loosely held and eclectic variety of Islam. Obama spent a little over four years in Indonesia where he attended at different times a public Indonesian school and a private Catholic school.

Obama became exposed to African American religious traditions in his post-college years as he entered into community work in the Chicago area. In 1988 he converted to Christianity, was baptized, and joined the Trinity United Church of Christ in Chicago where he attended regularly for two decades. The Reverend Jeremiah Wright officiated at the Obama's wedding and the baptisms of their two children.

Obama has affirmed his Christian faith on numerous public occasions, including in his autobiography, Audacity of Hope. An interview with conservative Christian publication, Christianity Today, in January 2008 also made clear Obama's faith. He declares he has never practiced Islam, and speaks of "accepting Jesus Christ." Nevertheless, despite these public professions of Christian faith, many continue to challenge Obama's religious loyalties.

The question of religion and politics arises in conjunction with the ongoing debate about the American founding fathers and their intentions for the role of religion in the public sphere. The argument that the United States is a Christian nation makes incongruent the possibility of having a person of another religious belief in the highest office of the land. The concern seems to involve, among other things, the nature of the individual's loyalties, and the fear that a Muslim would put Islamic legal, military, or cultural concerns ahead of American ones. In this sense, the public anxiety about Obama's religious beliefs is not unlike that expressed when John F. Kennedy, a practicing Catholic, ran for president.

In actuality, however, the Constitution does not establish any particular faith as a requirement for any political office.

David Holmes, The Faiths of the Postwar Presidents: from Truman to Obama (University of Georgia Press, 2012)