Is the Tea Party a Religious Movement? 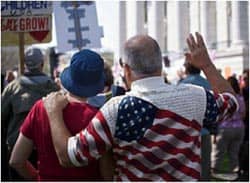 The Tea Party is a political movement that embraces populist, conservative, and libertarian values. Its name evokes the colonists' 1773 Boston Tea Party protest against British tax policies. It is not a political party, and its members include Republicans, Democrats, and Libertarians. Nonetheless, the majority of Tea Party members vote Republican, and recommend Republican candidates.

The Tea Party's agenda includes cutting the size of the federal government, individual freedoms, reduced taxation, states' rights, and individual responsibility. It has no religious agenda, nor does it advocate any religious position. In this sense, the Tea Party cannot be called a religious movement.

Tea Party members are overwhelming conservative both on economic and national fiscal policies as well as on social issues; they are generally pro-life and they oppose same-sex marriage. A large proportion of its membership is white and evangelical. Nevertheless, other Christian positions find it less compelling in light of their political priorities.

For example, Progressive and liberal Christian voices have challenged the religious character of the Tea Party and have accused it of being in conflict with Christian values. Their political priorities draw on other religious perspectives and they believe the Tea Party's focus on individual responsibility and smaller government neglects the larger Christian values of social justice and compassion for the poor. Jim Wallis of Sojourners has pointedly criticized the idea that libertarian and Christian values are compatible.

Roman Catholic attitudes toward the Tea Party's goals and methods are diverse. While many of their social values align with Tea Party positions, particularly on abortion and marriage, their beliefs about the proper role of the government in health care, immigration, and employment, among other issues, reflect less libertarian positions. Some recent studies show that approximately half of Roman Catholics sympathize with Tea Party frustrations, though far fewer would support a Tea Party candidate.

Since President Obama's election in 2008, the Tea Party has increased its numbers and its presence in American politics. Several prominent voices in the 2012 campaign are affiliated with the Tea Party, including Ron Paul, Michele Bachmann, and Rick Perry.

"Is the Tea Party a Christian Movement?" (Timothy Dalrymple, Patheos.com)

"Is the Religious Right Taking Over the Tea Party?" (Tim Koelkebeck, Huffington Post)

"Does the Tea Party Have a Religion Problem?" (R.R. Reno, First Things)