Were the Early Christians Socialists? 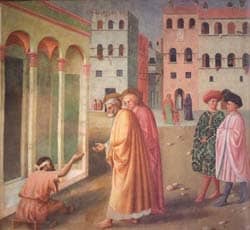 The earliest biblical accounts of Christian believers after the ascension of Jesus describe a generous and compassionate community. Some argue that it also describes a proto-socialist economic system.

All the believers were one in heart and mind. No one claimed that any of his possessions was his own, but they shared everything they had. . . . There were no needy persons among them. For from time to time those who owned lands or houses sold them, brought the money from the sales and put it at the apostles' feet, and it was distributed to anyone as he had need (Acts 4:32-35).

There are a number of problems with interpreting this passage to justify socialism as a political economy for 21st-century nation-states.

First, this passage is not a good description of socialism as it is understood today. Most contemporary theories of socialism include state-managed means of production, mandated redistribution of goods, and limits on private ownership. None of these is evident in the passage cited above.

Second, the passage does not describe a state policy. This was a voluntary association of like-minded believers who willingly shared their goods. It is difficult to apply this descriptive practice of a small community to prescriptive policies for a governmental structure.

Fourth, the passage may describe a temporary arrangement in the Jerusalem community. There is no indication in later scripture passages or other early Church writings that this practice continued, or that it was replicated in other Christian communities.

Insofar as commentators on either the political Left or Right make direct economic applications from scripture for governmental policies, they operate under the implicit assumption that the U.S. government should be adopting Christian practices. This creates tension, both within Christian communities who interpret the passages differently, and in Christian/non-Christian political discourse. Embracing Christian values and translating them into legislation require a contemporary political posture, which is indeterminate from biblical accounts and must address issues not raised in first-century settings.

"It's Not 'Class Warfare': It's Christianity" (Susan Brooks Thistlethwaite, Washington Post's On Faith)