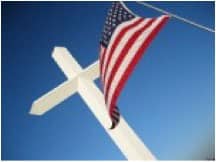 The term "Dominionism" was coined in the late 20th century by sociologists trying to identify a particular and narrow stream of Christian political thought. The idea of "Dominionism" derives from the King James term in Genesis 1:28: "And God blessed [Adam and Eve], and God said unto them, Be fruitful, and multiply, and replenish the earth, and subdue it: and have dominion over the fish of the sea, and over the fowl of the air, and over every living thing that moveth upon the earth."

While most Christians - liberal and conservative, Roman Catholic and Protestant - interpret this verse as a call to be good stewards of creation, Dominionists interpret it as a mandate to govern the earth politically in the name of God. Dominionism teaches that the United States is an inherently Christian nation, and that consequently Christians should determine its values, political structures, mores, and cultural practices.

Dominionist ideas lie on a political spectrum, and some mild forms are nothing more than a strong nationalism and a belief that Christian values belong in the public sphere. Most who believe this way would strongly support the separation of Church and State and the democratic process. They advocate cooperation with non-Christian groups and organizations that share their moral values, and uphold the Constitution and the democratic process.

Other, more aggressive, forms of Dominionist thinking - whether acknowledged as such or not - include a vigorous activism that aims at the establishment of a Christian society governed solely by Christians for the larger good. They do not advocate violence, and do not seek to subvert the political process so much as to manipulate it until a theonomic society can be accomplished.

Rhetoric about Dominionism has permeated the media as the campaigning begins for the 2012 election. Several candidates have been accused of being Dominionists, including Michele Bachmann and Rick Perry, though no one accepts the label.

"Michele Bachmann and Dominionism Paranoia" by Douglas Groothuis at Patheos.com

"Just Because You're Paranoid, Don't Mean They're Not After You" by Jason Pitzl-Waters, The Wild Hunt at Patheos.com

"If Michelle Bachmann doesn't want to be regarded as having close ties to dominionists she should stop hiring them" by Fred Clark, Slacktivist at Patheos.com

"Be Not Afraid of Evangelicals" by Lisa Miller, The Washington Post