Let's start with the brute theological point: At its root, Christianity is a metaphysics, not an ethics. It begins as a claim about what is, not a claim about how people ought to behave or what laws they ought to pass.

Now, maybe that's too strongly stated: too bereft of nuance, too little hedged with qualifiers and deprecating gestures. Still, however exaggerated, it at least aims us toward something important—something we often forget here at the close of modernity, something that bears on the question of the culture wars. For down at its root, Christianity is the dead rising. Christianity is the Real Presence of the Eucharist and the drama of forgiveness. Christianity is the living stones, with every blade of grass singing hymns of thankfulness at its creation. Christianity is miracles, and speaking in tongues, and snake-handling, and the Blessed Virgin, and eavesdropping on the communion of saints in heaven: everything that embarrasses the oh-so-modern churchgoer.

Read the Creed, for God's sake—not a single line of which concerns a behavior other than belief in the metaphysical declarations it makes. Read Paul's discourse on Mars Hill. Read the Sermon on the Mount, for that matter: "the highest morals, the perfect standard," as Augustine told us. Yet even there, the emphasis is the individual morality that derives from awareness of the true structure of this god-haunted world. You start, as Christianity starts, with a cosmology and soteriology: The world is a broken place, and we need blessing—and we need it soon, because the apocalyptic night will shortly fall upon us.

Of course, scattered through the Gospels and developed through the rest of the New Testament are any number of ethical observations, applying, sifting, and developing the ethical work of the Old Testament. And certainly those observations, together with the logical consequences of the Christian way of understanding reality, suggest a more comprehensive public morality. Why is it any surprise that as the West lived with Christianity century after century, a comprehensive moral system was developed, however much the individuals of any particular era failed to live up to it?

In fact, we have a name for all that; we call it Christendom. Christianity is fundamentally a metaphysics. Christendom is mostly an ethics. And our trouble these days is that Christendom is broken. "Little moralistic females à la George Eliot," Nietzsche once sneered—together with all those English "flatheads" who imagined they would be able to maintain the high moral progress of public Christendom without any public defense of Christian metaphysics.

Of course, Nietzsche was rather pleased to note the intellectual doom of Christendom, while others of us regret the decline, but still, there it is: In late modernity, we systematically sloughed off the metaphysics as an embarrassment, to concentrate instead on the ethics, and then we were shocked to find that we couldn't defend the ethics against anyone who challenged it. The heirs of the high moral certainty of American Christendom (as I argue in my new book An Anxious Age) are not the few remaining pew-sitters in the dying Mainline churches; the real heirs, the inheritors of the Mainline attitude, are the cultural elites who imagine both that they constitute the morally advanced mainstream of civilization and that they have slipped the chains of Christianity.

On the point about slipping, they are surely right. Christendom cannot stand against the modern moralism that has defined its most righteous behavior as the destruction of any remnant of the metaphysically ungrounded claims of Christian ethics. So why are we preaching social ethics? It's boring, and it's doomed. The pope knows better, and Russell Moore knows better.

Forget the culture-wars crap. It was a fight worth having, back in the day when there was enough Christendom left to be worth defending. But such as American Christendom was, the collapse of the Mainline has brought it to an end. Start, instead, with re-enchantment: Preach the word of God in the trees and rivers. The graves giving up their dead. The angels swirling around the Throne. Existence itself figuring the Trinity, in how we live and move and have our being. Christ crucified and Christ resurrected. All the rest can follow, if God wants. 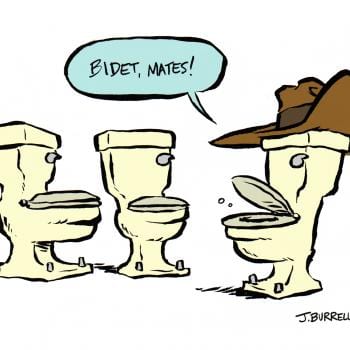 Australian Toilets
J. Burrello
Get Patheos Newsletters
Get the latest from Patheos by signing up for our newsletters. Try our 3 most popular, or select from our huge collection of unique and thought-provoking newsletters.
From time to time you will also receive Special Offers from our partners that help us make this content free for you. You can opt out of these offers at any time.
see our full list of newsletters
Editor's picks See all columnists