Moreover, other planets will also have their seasonal cycles, from Solstices to Equinoxes, and the cross-quarters between. Many will have their own moons, and the stars in their skies may be configured into constellations, forming signs of an alien Zodiac. And new tales will be told of how it all began, and where we came from, and where we going. Paganism is universal.

The end of the Mayan calendar — or is it the Beginning?

The 25,920-year-long Long Count Calendar of the Mayans, which records one full precessional cycle of the Earth's axis among the stars, finally reached its end on winter solstice of 2012. But when a calendar ends, you don't burn down the house (or blow up the planet!). You just take it down and put up a new one. And the fun thing about putting up a new calendar is that you get to decide what it will look like! Shall it feature images of cats, dragons, babes, cars, wizards, spaceships, Hubble photos? Shall it list secular or religious holidays? Full moons and Sabbats? Each time we put up a new calendar, we get to choose for another year.

And so it is with the new calendar we get to choose for this new Aeon: the Age of Aquarius. The possibilities are limitless, and, as always at such transitional times, we have the opportunity to choose foolishly or wisely. I believe, however, that most people on Earth hold certain dreams and visions in common — dreams of freedom, liberation, personal empowerment, peace, harmony, love, balance, hope, prosperity, happy children and a healthy planet; dreams of

And sunrise on the morning of December 22, 2012, was, literally, "The Dawning of the Age of Aquarius." Astrological attributes of Aquarius include enlightenment, the revelation of truth, and the expansion of consciousness. While the symbol (and sacrament) of Aquarius is obviously water (the universal medium of life: "Water shared is life shared"), Aquarius is an Air sign, signifying communication, networking, ideas, wisdom, air travel, and even space travel and colonization as we embark upon the great Diaspora of humankind — Gaea's progeny — among the stars. And most importantly, we welcome the coalescence of consciousness on a global scale: the Awakening of Gaea. And — just like the "Creative Explosion" last time we entered the Age of Aquarius, 26,000 years ago — we can expect a new Awakening such as the world has not seen since the Ice Age!

Over the past thirty years I have traveled the world, meeting with magickal practitioners, indigenous tribal elders, and shamans of many lands and cultures. The subject of Mother Earth and Her Awakening has been a recurrent theme of our conversations. I have never encountered so widespread a paradigm among wise ones everywhere as that of the immanent Awakening of global consciousness. Which shall we choose — Apocalypse or Apotheasis? 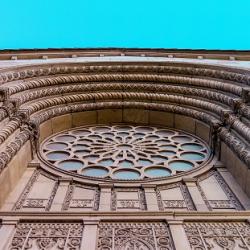 Keeping Communion Holy
C. Don Jones
Get Patheos Newsletters
Get the latest from Patheos by signing up for our newsletters. Try our 3 most popular, or select from our huge collection of unique and thought-provoking newsletters.
From time to time you will also receive Special Offers from our partners that help us make this content free for you. You can opt out of these offers at any time.
see our full list of newsletters
Editor's picks See all columnists