Raising Church Leaders: What I Did This Summer

For a few years, we were a teaching church, working with seminary students from Chicago schools. Sure, we were mentoring the next generation of clergy who had already decided to pursue this call. But their own churches, somewhere else, had shaped their calls. What were we doing to mentor the next generation of clergy from our own congregation? What could we do on the supply side of the pipeline?

We started a summer internship for high school and college youth from our own church. They would spend Tuesdays and Sundays at church. They would apply with an essay about why they were called to Christian leadership, lay or ordained. The adults loved the idea. We had fourteen applicants for four spots, and every kid who applied was a natural choice. It was terrible to turn them down. Now, the adults were furious. What had I gotten myself into?

This summer, five years later, the team selected four females out of an excellent candidate pool. Also on full-time staff for the summer, we have a seminarian raised in our church, now entering her third year at Yale Divinity School. We currently have eight church members on the ordination track, but Corinne Ellis is the first to attend my alma mater for her theological training. What with the gender sweep of our young intern pool, and Corinne, a student at Yale at the same age I had been, this summer had a bit of a mini-me feel.

Even though Corinne is in her early twenties, church members still approached her after worship to ask her what grade she was in. It's hard to be a prophet in your hometown, particularly when they have frozen you in time to be forever the age you were when you gave that terrific sermon on Senior High Sunday. But Corinne played an invaluable role in mentoring the high school and college interns. They soon nicknamed her "Mother Duck," since they were always following her from one place to another, like ducklings. It struck me that the young interns were being mentored more by Corinne than by me, and that I, in turn had mentored Corinne. Years ago, before going to divinity school, Corinne was a college intern at our church.

Three of those young interns from past years have now gone to seminary, but most of them are still in college. Before this year, our congregation could only remember one church member getting ordained, and by then, he had left our church. This summer two of our former summer interns will be ordained. They will be among five church members to get ordained this year.

This summer, on a picket line for hotel workers, I got to introduce our summer intern to our former seminary intern Waltrina Middleton. She is now the Minister for Youth Advocacy and Leadership Formation for our denomination. She knows much more about youth leadership than I do. But she might not be in her current role if it were not for our work as a teaching church. 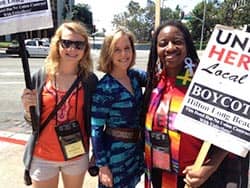 I know, I know. The cynical people who just read the memo about the decline of the church will tell me I am being irresponsible to ask these bright young people to consider the ministry. But I would argue that some of those decline statistics relate to the fact that the church stopped asking.

We stopped expecting excellent candidates for the ministry. We told them they could practice their faith just as well as lawyers. Some depressed pastors even told them to only consider the ministry if they could consider nothing else. Such soft sell modesty got us exactly what we asked for. It's time to ask for more.

Perhaps I'm just selfish. I want to make sure I have interesting people to sit next to at clergy meetings.

And I can't bear to sit through one more clergy meeting listening to older ministers wring their hands about "how to attract the missing young people." I am passionate about young leaders in the church but I am bored by the conversation about what "we have to do about it."

It is not my job to produce a church to appeal to all future generations.

It is my job to produce leaders for the church from those future generations. It is also my job to teach my church that this is our job.

It is God's job to do the calling, into pulpits, pews, prayer rugs, or temples. But once God calls, the church needs to back it up. We need to make the case for leadership to our own church members when they are young enough to hear it.