Patheos Answers
Patheos answers the question:
Do Catholics Have Their Own Bible?
by Kathleen Mulhern, Ph.D.

These books include Tobit, Judith, First Maccabees, Second Maccabees, Wisdom, Sirach (also called Ecclesiasticus), and Baruch. There are also extended supplements to the books of Daniel and Esther. This material was included in a Greek translation of the Hebrew Scriptures called the Septuagint. The Septuagint was the work of Jewish scholars over a century or more, from the 3rd to 2nd centuries B.C., as they translated their Hebrew sacred texts into Greek. As the Christian Church developed within a Greek-speaking world, the Septuagint was the translation of scripture that it used.

In the centuries after the time of Christ, the rabbinic Jewish community established its own canon and by at least the 4th century the Hebrew Bible did not include this extra material. Jewish scholars called them Sefarim Hizonim, or Extraneous Books. The seven books, along with a handful of other short books (which are often included in Eastern Orthodox versions of the Bible), were labeled deuterocanonical, or secondary.

The canon (the ancient Christian standard of authoritative scriptures) was based on the Septuagint, the most accessible version of the Hebrew scriptures to a Greek-speaking audience. Saint Jerome (c. 347-419), a devout and erudite scholar of languages, literature, and sacred scriptures, was asked to translate the Old Testament into Latin. He began by translating directly from the Septuagint, but later switched to direct translations from the original Hebrew. In his studies, he developed personal doubts about the inspiration of the excluded texts, but he was ultimately persuaded to include them. Even so, they continued to retain a secondary, non-authoritative, status in common Church usage until the Council of Trent (1545-1563) when the Church rejected the Reformers’ translations of scripture.

At the time of the Reformation, many scholars were reading the Jewish scriptures in their original Hebrew language rather than the Greek version or its later Latin translation, and thus felt that the rabbinic Judaic canon was more authoritative. After the Council of Trent, the Catholic Bible continued to rely on the Greek Septuagint version, arguing that the apostolic tradition of using the Septuagint justified its usage and validated all of its content, including the removed books, as authentic sacred scripture. Protestants, however, began to translate the Old Testament from the original Hebrew and used the rabbinic Jewish canon, eliminating the disputed texts. Thus, the Catholic Bible has 46 books in the Old Testament whereas the Protestant Bible only has 39 books in the Old Testament. All Christians everywhere recognize the 27 books of the New Testament to be sacred scripture.

Some Protestant Bibles include the disputed material as a separate section called the Apocrypha, which simply means material not considered authentic scripture, but most do not. The Catholic versions of the Old Testament, however, embed the books near other books of like material. So, for example, Tobit, Judith, and 1 and 2 Maccabees are grouped with historical books and follow Ezra and Nehemiah. Wisdom and Sirach are included with the wisdom literature, following Song of Songs. Baruch follows Lamentations as a prophetic book.


12/15/2020 4:02:12 PM
About Kathleen Mulhern, Ph.D
Kathleen Mulhern is a writer, editor, historian, speaker, and professor. She teaches courses in world history, European history, and history of Christianity. She has taught at Colorado School of Mines and Regis University, and is currently an adjunct professor at Denver Seminary in the areas of Church History and Spiritual Formation. Kathleen graduated with a B.A. from Wheaton College, earned an M.A. in French Literature from the University of Denver, an M.A. degree in Church History from Denver Seminary, and a Ph.D. in History from the University of Colorado.

More From Patheos About Catholic Bibles

Why The Protestant Bible Has Fewer Books than the Catholic Bible
How Catholics and Protestants Read Their Bibles (and Misconceptions Explained!)
Why Are Catholic Bibles Bigger?
What is a Specifically Catholic Interpretation of Holy Scripture?
Why Do Catholic Bibles Have Seven More (Deuterocanonical) Books?
"Why Don't Catholics Read the Bible More Than They Do?"

Catholic
Yes, It's About the White Supremacy
Guest Contributor 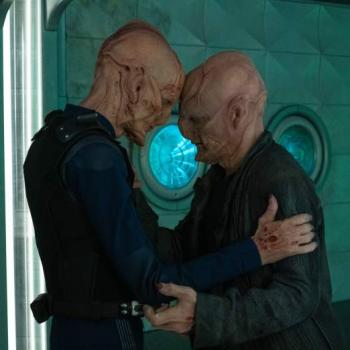