Patheos Answers
Patheos answers the question:
What Does It Mean to Be Enlightened in Buddhism?
by Kathleen Mulhern, PH.D.

Buddhist enlightenment is the achievement of Buddhahood. As Siddhartha Gautama sat under the Bodhi tree, he meditated until he attained the full realization of his nature. He became awakened, liberated from the endless cycles of suffering in birth, death, and rebirth. Buddha means “awakened one.” The goal of Buddhism is this liberation, also referred to as moksha. When one is enlightened, he or she has gained perfect insight into the Four Noble Truths. Dukkha, the suffering caused by desires and distortions, ceases.

Enlightenment is something of a paradox to an outsider of Buddhism. Buddhism teaches that nothing can be permanent. Everything always arises from something else, and everything later transforms into something else. A child becomes an adult. Love turns to sadness. Pain turns to healing and learning. Despite this, however, enlightenment is said to be a permanent state. Once enlightened, a person does not return to ignorance. At death, he or she leaves the cycle of life, death, and reincarnation, called samsara, and enters nirvana, a state of complete peace without the potential to be reborn into an imperfect life littered with suffering.

Nirvana is the goal of enlightenment; it is the end of rebirth and the extinction of all karma, good or bad. It is the dissolution of the self. Some Buddhist traditions, however, teach another goal for those who wish to continue existence for the sake of others. These may become bodhisattvas, enlightened beings who, despite being able to enter into complete nirvana upon their death, nonetheless choose to be reborn into suffering. They do this in order to spread the teaching of Buddhism and help others escape the suffering of samsara before they themselves enjoy peace.

Methods of achieving enlightenment vary between different schools and traditions within Buddhism. Zen Buddhism, for example, tends to emphasize koans, riddles, and proverbs meant to force students to think in ways that force them to confront their own illusions and misconceptions about reality. All partake of the nature of the Buddha, and once we realize this, we can attain enlightenment. Pure Land Buddhists, on the other hand, work to build up enough merit in this life that they can be reborn in the Pure Land and be with Amitabha Buddha in the next life. There the way of enlightenment is much more pleasant and accessible.

While the details of reaching enlightenment vary between Buddhist schools and traditions, most agree that doing so requires snuffing out dangerous desires and liberating oneself from attachment. Ridding oneself of attachment does not solely mean giving up on foods that people crave or other similar desires. It means extinguishing all forms of desire, greed, and hatred. This includes detaching oneself from the idea that there is a permanent, unchangeable Self. People want to believe in the false notion that there is an “I” and an “other.” Only when this notion is erased can a person achieve liberation from samsara, enlightenment, and nirvana.

There is obviously a great deal of debate about how best to snuff out dangerous desires. The largest and best-known method is the tradition known as the Middle Way. The Middle Way follows the Eightfold Path, a method comprised of right understanding, right intention, right speech, right action, right livelihood, right effort, right mindfulness, and right concentration.

These eight steps can be grouped into three categories: wisdom, ethical conduct, and meditation. Though they are often read in a specific order, the eight steps on the Eightfold Path are not meant to be undertaken in any specific order but should reinforce and encourage one another.


3/27/2021 12:09:25 AM
About About Kathleen Mulhern, PH.D.
Kathleen Mulhern is a writer, editor, historian, speaker, and professor. She teaches courses in world history, European history, and history of Christianity. She has taught at Colorado School of Mines and Regis University, and is currently an adjunct professor at Denver Seminary in the areas of Church History and Spiritual Formation. Kathleen graduated with a B.A. from Wheaton College, earned an M.A. in French Literature from the University of Denver, an M.A. degree in Church History from Denver Seminary, and a Ph.D. in History from the University of Colorado.

More from Patheos about Enlightenment 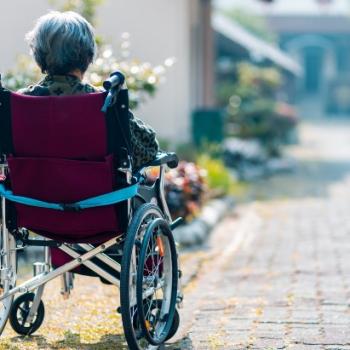