The Bible warns us about indulging in judgement, but why would that be? In my view, judgement is not just another area of sin, alongside other behaviours that harm ourselves and other people; it is the foundation of all brokenness.

This will be the first in a short series of articles on the subject in which I’ll be looking at judgement from four different viewpoints – judging others, judging ourselves, judging God and God’s righteous judgement. Today the focus is on judging others, but each topic bleeds into the next, so I won’t attempt to erect false boundaries.

1 Cor 4: 5, offers a helpful starting point for understanding judgement, defining it as the assumption of motive:

Therefore do not pronounce judgment before the time, before the Lord comes, who will bring to light the things now hidden in darkness and will disclose the purposes of the heart. Then each one will receive his commendation from God.

It is God’s place to ‘disclose the purposes of the heart’, and until he does, we will never truly know another person’s motivation. Indeed, we are not meant to know, and are to avoid assumption at all costs, if we are to continue to walk with the Spirit. And yet, most of us judge on a daily basis.

Let’s say I’m annoyed because someone wouldn’t let me out at a junction. If I’m frustrated by the inconvenience that’s one thing, but if I’m angry because I think the person is selfish, that’s judgement; I’ve decided what’s going on in their heart, when in fact they might be in an awful hurry for any number of legitimate reasons. Instead of keeping an open mind, I’ve assumed the reason behind their action and reacted emotionally to that internal decision.

The assumption of motive is the essence of all judgement, when in fact only God knows the heart, which is why only God can judge. To assume a motive, we must first give ourselves permission to do so, which means elevating ourselves above the other person – or in other words, taking a god-like status. It is quite a reach to assume we know the inside of another person’s head.

Humanity’s embracing of judgement is the true disaster of Genesis – whether we read the creation account as a literal event, or a Big Story, redolent with meaning, the message is the same. For the sake of simplicity, I’m going to refer to Adam and Eve as if they were real individuals.

We all know the story. Adam and Eve were told they could eat from any tree in the garden except one – the Tree of the Knowledge of Good and Evil – which they both subsequently sampled.

The serpent tempted Eve by saying that upon eating it, she would be like God, which is the very heart of human judgement – to raise ourselves above others, assuming and judging the intentions of a person’s heart. In other words, deciding whether they are good or evil.

This knowledge of good and evil is heady, deceitful and illusory. We are not, and never will be God, so when we step onto the sacred ground of judgement, we move from peace and into rebellion, which is why God instructed them not to eat from the Tree of the Knowledge of Good and Evil in the first place.

God is never arbitrary in his commandments, and there was a very good reason to warn them away.

James 4:12 warns us about entering into judgement and usurping the place of God:

There is only one lawgiver and judge, he who is able to save and to destroy. But who are you to judge your neighbour?

In the creation account, Eve was persuaded by the serpent to pick and eat the fruit, which she in turn persuaded Adam to partake of. According to the faith of my upbringing, God was furious with them, cursed them, and cast them out of Eden as a punishment for their sin. If however, we look at the sequence of events after eating the forbidden fruit, I believe we can perceive a kinder story.

The pivotal moment came and went, and Adam and Eve obtained the knowledge of good and evil, warping them instantly. Their first response demonstrates the depth of the dark transition they had undergone. Genesis 3:7,

Then the eyes of both of them were opened, and they realised they were naked; so they sewed fig leaves together and made coverings for themselves.

Covering themselves was an act of shame. When God came looking for them, they hid from him, aware of and ashamed of themselves in a way that would previously have been unknown to them. God called out to them, and Adam responded (Gen 3:10):

I heard you in the garden, and I was afraid because I was naked; so I hid.

Their shame could not be in their nakedness alone, nor even in the realisation that there was such a thing as nakedness, which is not in itself good or bad. Their shame stemmed from judgement – this illusory knowledge of good and evil, which causes people to measure themselves against a standard.

Seeing their nakedness, they judged themselves. They regarded their own naked bodies and knew rejection – the rejection of the self. In those moments Adam and Eve decided they weren’t good enough, that they didn’t fit, that something was fundamentally wrong with them.

In concert with this, they also decided the God they knew and walked with was someone to be feared. Their entire perspective on themselves and on God was changed, and not for the better.

God had stated openly to Adam that if he ate of the Tree of the Knowledge of Good and Evil, he would surely die. In other words, if he ate, judgement would poison his heart, robbing him of the peaceful, easy connection with God he’d known to that time – a kind of spiritual death, which would be mirrored in the natural realm.

From that moment of judgement, humankind was cursed – a natural result of the great plummet of the human race, rather than a tailored punishment crafted by God. This curse, which for the sake of brevity I won’t go into, was a catastrophe of the most calamitous order. Our state changed from immortal to mortal when we embraced judgement.

We made ourselves gods, elevating ourselves above each other, pointing the finger of blame, as indeed Adam blamed Eve and Eve, the serpent. Our hearts became calloused, and our sense of shame was not only born but spread its tentacles into every corner of our lives, right down to shame about our physicality.

Humankind had fallen a long, long way, and there was no route back to freedom without the intervention of Christ.

Adam and Eve might have judged themselves, but God took a different approach (Gen 3:21-23):

The Lord God made garments of skin for Adam and his wife and clothed them. And the Lord God said, “The man has now become like one of us, knowing good and evil. He must not be allowed to reach out his hand and take also from the tree of life and eat, and live forever.” So the Lord God banished him from the Garden of Eden to work the ground from which he had been taken.

God understood their diminished state and slaughtered an animal to cover their nakedness – not because nakedness itself is shameful, but because humankind had been gripped by shame, and the Lord was already planning a remedy.

The sacrifice of an animal in a deathless environment would have been shocking and bloody, but it spoke of the sacrifice that would release humankind from judgement and therefore from shame, that would undo the devastating damage caused by Adam and Eve – the sacrifice of Christ, who died to bring us back to God.

The banishment from Eden was not punitive. Rather, to allow us to live eternally in such a diminished state would have been immensely cruel, and a far worse punishment than sending us out from utopia.

Banishing us was a mercy, and the beginning of a long journey we are still undertaking as a race. When we embraced judgement we left paradise, innocence and freedom in our hearts and in our flesh, and the only way to be free of this burden is through Christ.

Only then, when Christ within us is the hope of glory, can we eat from the Tree of Life and live forever. God had already committed himself to sending his son when he sacrificed the animal and clothed Adam and Eve. It was a symbol of the Great Redemption to come. Hebrews 9, 22:

There is no forgiveness without the shedding of blood.

Some say that rebellion was the original sin – that God gave us a command and we didn’t keep it – but for me that is an insufficient explanation, painting God as an arbitrary and merciless keeper of rules. Judgement is the truly consequential original sin – the sin that took us away from God, from trust and from ourselves.

The Lord told us not to eat from the Tree of the Knowledge of Good and Evil because of the deleterious effect it would have on us, not because he likes rules and rule-keeping. If we understand that self-judgement was the first manifestation of the fall, it is easy to accept judgement itself as the fulcrum of human rebellion.

In turn, this understanding brings greater depth to our perception of the Gospel, and all that God would free us from.

Next, I’ll be looking more deeply into self-judgement, focusing on Jesus, and how he dealt with challenges to his nature, worth and calling.

N.B. For anyone wanting to get ahead, and dig deeper into this topic, I wrote a book on this ("Who Am I To Judge?") under the pseudonym James Bewley, which is available on all regional Amazon sites. 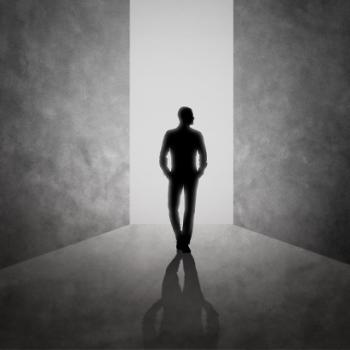 About Duncan Pile
Duncan Pile is a writer, author and speaker, living in Derbyshire, England with his wife and stepson. His mystical approach to faith straddles the Evangelical/Progressive divide, and flowing from lived experience, he is passionate about the deconstruction and reconstruction of the Christian faith.
Get Patheos Newsletters
Get the latest from Patheos by signing up for our newsletters. Try our 3 most popular, or select from our huge collection of unique and thought-provoking newsletters.
From time to time you will also receive Special Offers from our partners that help us make this content free for you. You can opt out of these offers at any time.
see our full list of newsletters