This Brave Young Woman Prayed For Healing Every Day! (And you’ll never believe what happened next…)

This Brave Young Woman Prayed For Healing Every Day! (And you’ll never believe what happened next…) January 27, 2016 Horus Gilgamesh

This brave young woman prayed for healing every day and you will never believe what happened next!

What happened? Well.. absolutely nothing. (Actually, worse than nothing – her disease continued to worsen as she resisted the advice of her doctors and top surgeons before eventually going into a coma when her husband finally used his power of attorney to approve the once-simple-now-life-threatening surgery that took a team of doctors and nurses with decades of medical expertise 8 hours to eventually save her life – all so she could wake up and thank Jesus for answering her prayers and performing a miracle – just for her!)

Stop falling for sensationalized click-bait headlines, folks. Of course, this is just a fake story. At first this was all just going to be a short spoof for the sake of shaming all of those sites (and consumers) that take part in click-bait spammy articles, but it got me thinking about prayer (again)…

Some might find it distasteful to use a fake example of an all too common personal tragedy to challenge the well documented power of prayer. Originally I was going to use the very real tragedy of the kidnapped Chibok girls, but felt it was “too close to home.” Actually, isn’t that the point, really – when can we have honest and relevant conversations about the power of prayer? Beyond the Chibok girls, countless kidnappings and subsequent reports of forced marriages, slavery, and murders have been going on for years now with no end in sight – despite the prayers of billions of people from all faiths. Say what you want about the corruption of the Nigerian government, but it doesn’t appear that Jesus has been making good on his promise in Matthew 21:22. Or has he?

This question leads me to acknowledge a very common Christian rationalization/justification about the effectiveness of prayer – this time from the very popular site, GotQuestions.org

“God has promised that, when we ask for things that are in accordance with His will for our lives, He will give us what we ask for (1 John 5:14–15)… When we talk to Him, He has promised to listen and respond (Matthew 6:6; Romans 8:26–27). His answer may be some variation of “yes” or “no” or “wait, not now.” Keep in mind that prayer is not our way of getting God to do what we want. Our prayers should be focused on things that honor and glorify God.”

Oh… so, apparently miraculously saving over 200 kidnapped Christian girls is not honoring or glorifying to God? Got it, thanks for clearing things up. Of course, there’s always the all-too-convenient “mysterious ways” get-out-of-jail-free card to be played anytime things don’t work out as we hoped… After all, God is God, right? Who are we to question God’s ways?!?! Let’s see what a few popular Christian memes say on the subject…

Such hope you can almost feel the love of God, right? Actually, these prayers (and lack of responses) might lead one to reflect on the Epicurean paradox…

Are we making light of the ongoing Chibok tragedies? Absolutely not! Sadly though, many of the Christian commentaries I’ve seen over the last year on the subject are not far from the horrific satirical prayers I’ve posted above. In short, it’s pretty easy to talk big about the plans, powers, and miracles of God when you aren’t the 13 year-old bride held captive in the jungle. Unless you are willing to repeat one of these memes to their face and take their place, I just… Well, I can’t.

Whenever I need a little pick-me-up, I just turn to the musical stylings of Tim Minchin for a little inspiration. (Not to mention, it’s just a phenomenal live performance of an extremely complicated song.)

But seriously, when it comes to the power of the prayer, I do find it very troubling when faith-healing parents allow their children to suffer and die as a sign of their conviction and their trust of their Lord’s will (rather than giving them two damn Tylenol to break a simple fever to save their lives). Yet, they are still protected in many states under the guise of religious freedom exemptions. Likewise, I find it disrespectful for patients to ignore the truly amazing efforts and results at the hands of trained medical experts to instead turn their hands to heaven and thank God for their miraculous recovery.

Prayer: just like gambling, nobody talks about all the times they lose.

P.S. No, seriously – watch the Tim Minchin clip above – it’s truly brilliant! (Yes, I have a total man crush…) 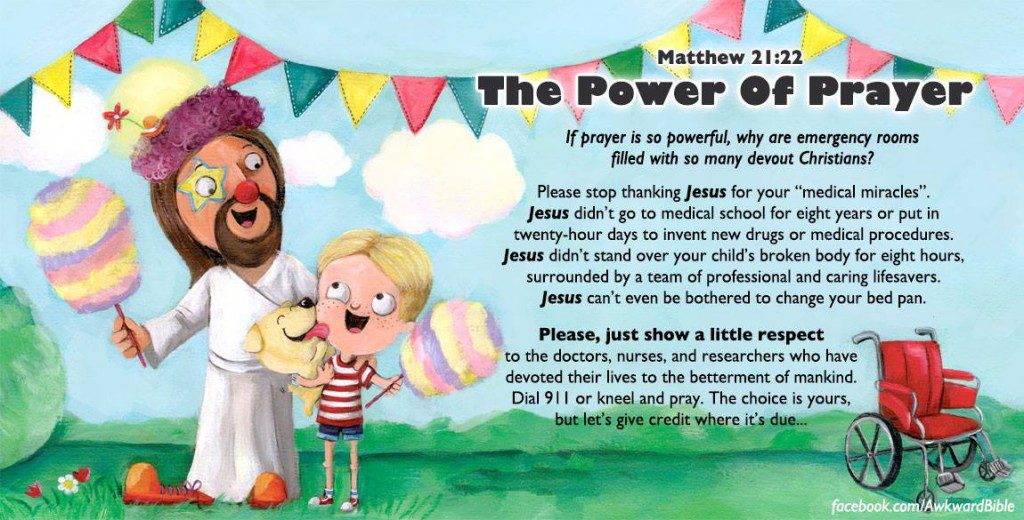 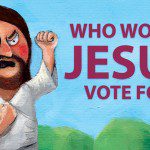 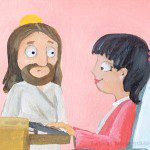 January 28, 2016 The Unseen Stalker (Who Is Watching You While You Read This)
Recent Comments
0 | Leave a Comment
""Why don't we see more evangelism betting directed towards animals...?"Well, because evangelism is directed toward ..."
Eberhardt von Hessen “When Your Ass Talks Back…” – ..."
"Could be. The rebels have their Star Wars and the Hindus have Shiva. All the ..."
Martin Zeichner Hell-o-ween: When Jesus Comes Knocking
"I would be scared of anyone that holds that kind of power. Power corrupts and ..."
Martin Zeichner Hell-o-ween: When Jesus Comes Knocking
""So, let me get this straight, Just Plain Phil - I illustrate a Bible verse ..."
Candy Smith Baby, It’s What’s For Dinner! (Wait! ..."
Browse Our Archives
get the latest from
Nonreligious
Sign up for our newsletter
POPULAR AT PATHEOS Nonreligious
1