He Is Risen! (An Awkward Easter Story)

If you’ve been to church on Easter in the last fifty years, you’ve probably heard the pastor call out, “He Is Risen!” The congregation has been well trained to answer with the cheerful pep-rally cry, “He Is Risen, Indeed!”

I’ve always been a little uncomfortable with chanting anything in a monotone voice, as it reminds me of zombies walking the streets with their eyes rolled back in their heads. What most Christians don’t realize is that the last three words of Mark’s original Gospel give a little different context to the “He Is Risen” chants… 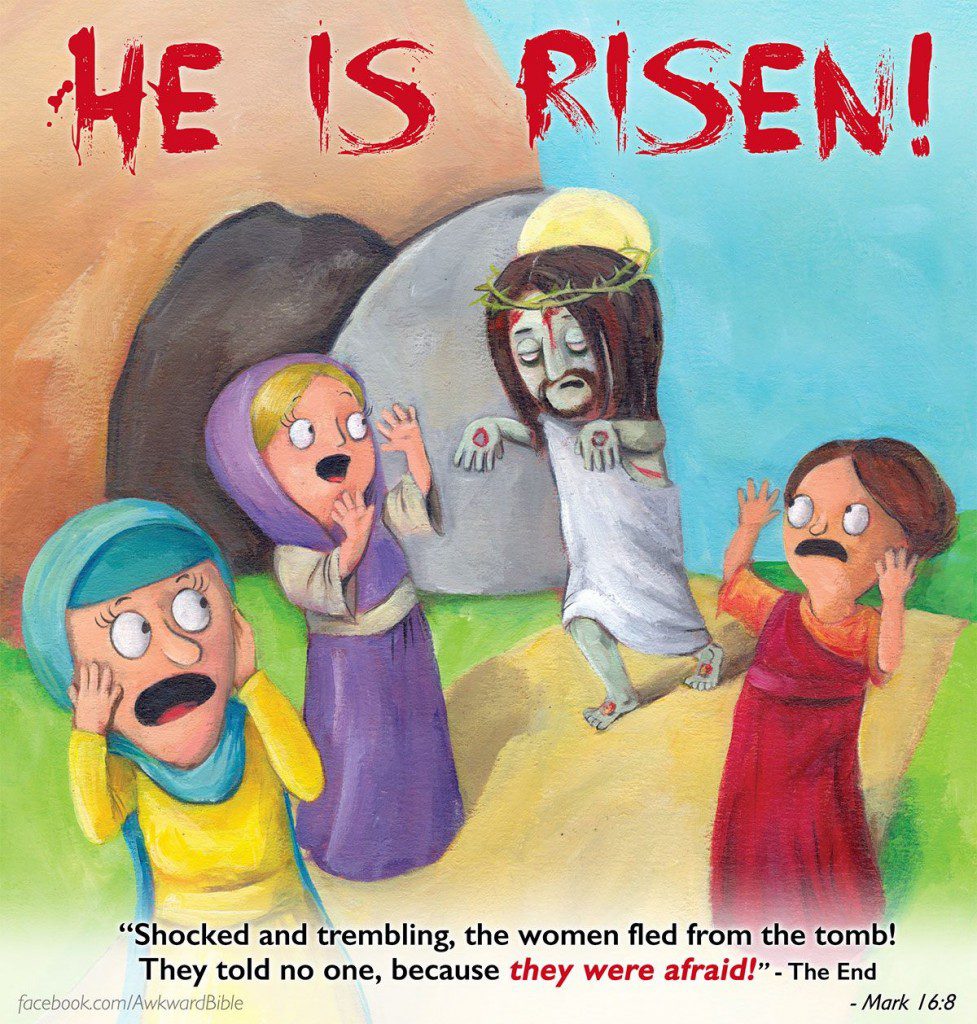 “They were afraid.” Period. The End.

Most Biblical scholars agree – the traditionally known ending of the Gospel of Mark (16:9-20) found in most Bibles was a much later addition, a forgery or fake – not found in the earliest (most original, most authentic) manuscripts. Interestingly, this later add-on includes some of the most interesting and important passages of Mark – Jesus appearing to Mary Magdalene and the two disciples, the announcement of the Great Commission, instructions for handling snakes, drinking poisons, casting out demons, and Christ’s ascension into heaven. That’s a LOT of content to pack into 11 short verses – conveniently added much later by a different author with a very different writing style and different agenda. (Please don’t take my word for it, check the footnotes of most Bibles for the notation of the addition.)

So, what does this mean? It is pretty easy to understand that the original author of the Gospel of Mark, like any author, was *very* intentional about the last three words he chose for his book. Next to the opening sentence being the “hook” of any piece of literature, the last sentence is extremely important – driving the final point home for the reader.

“Shocked and trembling, the women fled from the tomb! They told no one, because they were afraid!”  It is fun to compare this original ending found in Mark 16:8 translation by translation using a service like BibleHub. (Can anybody guess where the NLT found their extra conversation-changing verbiage?)

Please take a moment to think about the last three words of the first gospel ever written. Think about how this story came to be “enhanced” in the later written Gospels of Matthew, Luke, and John. It’s worth noting that it was in this first, earliest Gospel of Mark that we see a tortured, confused, and frightened Jesus crying out just before His death, “Eloi, Eloi, lema sabachthani – my god, my god – why have you forsaken me?” (Hardly the picture of the calm, determined, inspired Jesus who prayed, “Father, forgive them, for they do not know what they are doing,” which can only be found in the later re-telling in the Gospel of Luke 23:34.)

But, why were the women afraid? Before you lay down the standard party line of, “But, they weren’t afraid of Jesus, they were afraid of the angel in the tomb,” – I’d just encourage you to read your Bibles carefully. In fact, the actual Gospel of Mark never suggests there was an angel in Christ’s tomb at all – just, “a young man dressed in a white robe.” – Mark 16:5 (Of course, it doesn’t say that they were running from a zombie, either – but, for this meme, we simply re-used half of an illustration that is accompanied by a different verse in our first book, relating to the saints coming out of their tombs and walking the streets upon Christ’s death. Much like the authors of the Gospels, we have a little fun from time to time.)

While most modern Bibles are at least honest enough to annotate the discrepancy of the additional ending to Mark in their footnotes, doesn’t it make you wonder, why is the *truth* about the Bible is being hidden in the footnotes in the first place? This would lead most people to wonder if anything else ever got added, altered, or removed from the Bible? No angel in the tomb? The Great Commission was added later? What other stories are told in church every Sunday without any question or true understanding? Hmm…

Remember: Don’t blame us, it is (or is not) in the Bible!
This full illustration featuring different verses and commentary can be found in:
Awkward Moments (Not Found In Your Average) Children’s Bible – Volume #1. 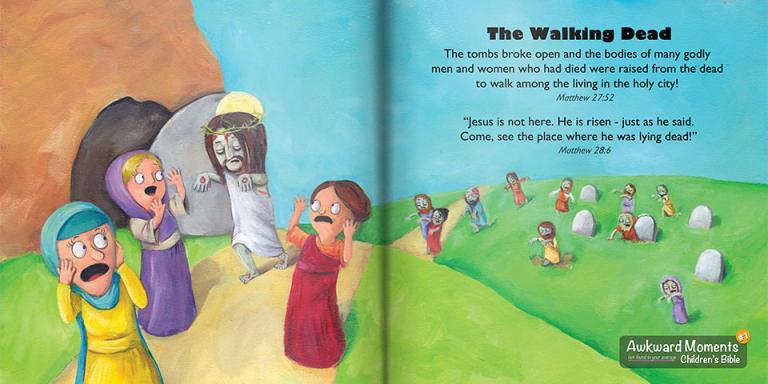 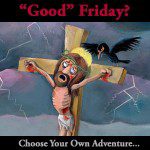 March 25, 2016
Good Friday - Choose Your Own Adventure
Next Post 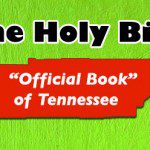 April 13, 2016 The "Holy Bible" to become official state book of Tennessee
Recent Comments
0 | Leave a Comment
""Why don't we see more evangelism betting directed towards animals...?"Well, because evangelism is directed toward ..."
Eberhardt von Hessen “When Your Ass Talks Back…” – ..."
"Could be. The rebels have their Star Wars and the Hindus have Shiva. All the ..."
Martin Zeichner Hell-o-ween: When Jesus Comes Knocking
"I would be scared of anyone that holds that kind of power. Power corrupts and ..."
Martin Zeichner Hell-o-ween: When Jesus Comes Knocking
""So, let me get this straight, Just Plain Phil - I illustrate a Bible verse ..."
Candy Smith Baby, It’s What’s For Dinner! (Wait! ..."
Browse Our Archives
get the latest from
Nonreligious
Sign up for our newsletter
POPULAR AT PATHEOS Nonreligious
1