Was Jesus Insane? (His Own Family Thought So…)

Was Jesus Insane? (His Own Family Thought So…) April 26, 2016 Horus Gilgamesh

Was Jesus insane? Many Christians would never even allow such a “blasphemous question” to be discussed in their presence. Therein lies the challenge – complete strangers, separated by centuries, assuming that they know a man better than his own family.

Why did Jesus’ family want to take custody of him in Mark 3:20-21? Most likely, because they knew he needed help and had put himself in danger by doing everything from stealing livestock, to throwing temper tantrums in the temple, to claiming he was the King (a fairly important position, already held by a powerful ruler). Is it really so impossible to even entertain the idea that maybe, just maybe – what if His family was right?

Of course, this isn’t the only time the Bible refers to Jesus as being anything but the perfect Son of God. The very next passage begins with the local religious leaders accusing, “He is possessed by Beelzebul – the prince of demons!” And, why wouldn’t they believe this? (Of course, this accusation would later be considered one of the first accusations of religious persecution, only making Jesus a larger anti-hero of lore.)

Now, try putting these stories into a modern perspective, given society’s vastly increased knowledge of mental health issues over the last 2,000 years. If you found yourself on a subway train when a stranger came aboard (with a gang of followers) and started preaching to passengers that he was not just the Son of God, but God himself, and that the only way to get to heaven was through him, and that you needed to abandon your family to follow him, and that you needed to drink his blood and eat his flesh for external life…. Well? Would you move closer to this man and his ragtag gang of followers? Not likely! 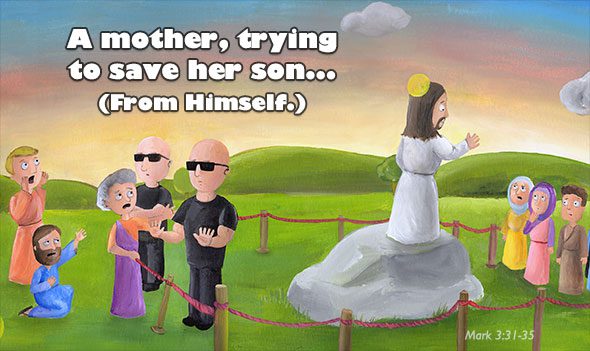 Yes, this is horribly sad. Reading the Bible today, I can’t help but imagine the emotions of poor Mary, a loving mother watching helplessly as her son spirals out of control. She tries to help Jesus, only to be rejected – just another stranger on the street, watching her son carry his cross to own death because nobody knows how to help him. Heartbreaking!

However, all of this gut-wrenching sadness does not a deity make. Many mothers have been forced to standby helplessly, to watch their mentally ill children suffer and die horrific deaths, often unaware of what was even happening to them as the needle was placed in their arm or the noose around their neck. Tragic. Horrific. And… human.

IMPORTANT QUESTION: When is the last time you read through the Gospels with an open mind, not directed by a context instructed by the weekly church bulletin? Are these not the actions and language of a “crazy” cult leader who abandons everything to live out their own obsession, living in their own delusion? And, can we really take the disciples word for what really happened in the New Testament, when, by following this leader, they may have been just fallen prey to an charismatic leader. After all, birds of a feather really do flock together. When members are rescued from cults like People’s Temple, Heaven’s Gate, or even the Branch Davidian – do we take the claims of these followers seriously? No.

I often wonder – what the lives of Jesus and his followers would have been like if He had not met a premature death? How would his life played out if He hadn’t chosen the suicide-by-cop ending for Himself? Is it possible that as the group’s suspicions and paranoia grew that they’d take drastic measures to prove their devotion to the cause?

Spoiler Alert: According to later tradition and conjecture, all of Jesus disciples (except one) eventually died due to their association with Jesus. Which, of course, in keeping with the teachings of any cult, is considered by later followers as acts of heroic devotion – martyrdom. 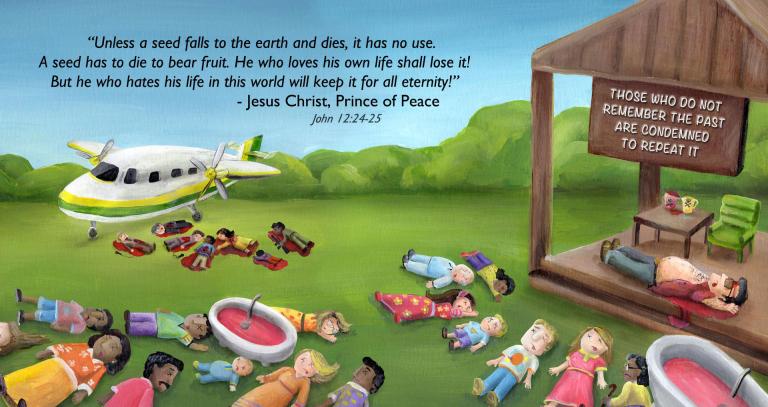 NOTE: All of this artwork is actually from entirely different illustrations from our books – depicting other scenes where even Jesus’ disciples were forced to ask, “What in the name of You are you talking about?” 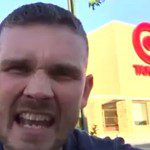 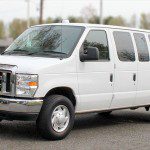 April 29, 2016 Intergalactic Sex Trafficking (And Other Biblical Truths)
Recent Comments
0 | Leave a Comment
Browse Our Archives
get the latest from
Nonreligious
Sign up for our newsletter
POPULAR AT PATHEOS Nonreligious
1

'No gratuitous violence in the Bible,'...
The Freethinker
Related posts from Able To Choose

Do We Have to Choose between Aggressive Religion...
Editor’s Note:  This is in response to a post that first appeared...
view all Nonreligious blogs
What Are Your Thoughts?leave a comment
Copyright 2008-2021, Patheos. All rights reserved.
error: Content is protected !!