It has become painfully clear in recent years that the vast majority of Americans (under the age of, say, 50) seem to have no idea about America’s first unifying, welcoming, secular motto of the United States dating back to 1776. They may be familiar with the phrase “e pluribus unum,” but have no idea what this Latin means; “Out of many, one.” It’s about… unity. Out of many countries, out of many races, out of many vocations, educations, and reputations – what it once meant to be an American, at least on paper was… open arms and equal opportunities.

It wasn’t until 1956, amid the Red Scare in a knee-jerk us-against-them show of propaganda when a Christian President led a Christian Congress to pass a law (later upheld by a Christian Supreme Court) that would replace our beautifully inclusive de-facto national motto with an official motto that would later invite division not only within our own borders, but around the world – “In God We Trust”. (You know, because we are so awesome, God’s on OUR side! Our God is better than your gods!) This was the same era that “Under God” was forced into the Pledge of Allegiance under the same circumstances. 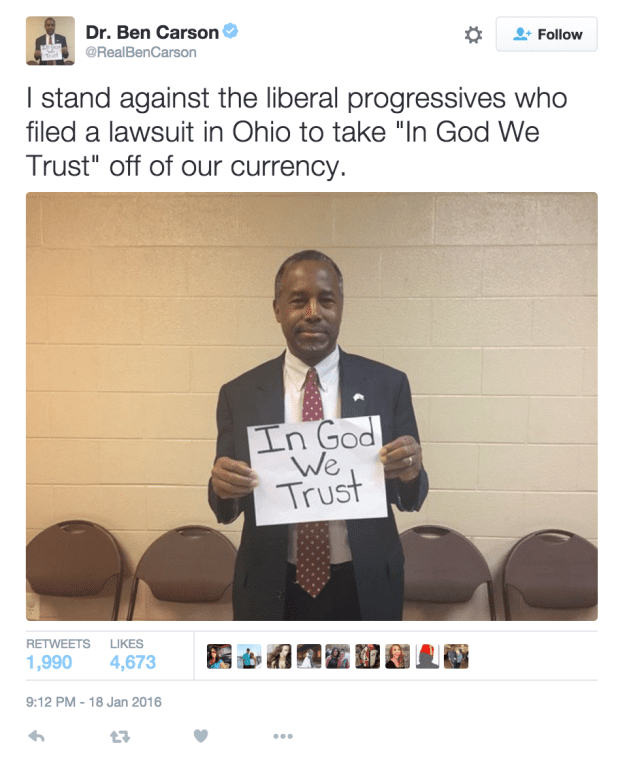 Which God? Whose god? Red god? Blue god? Did anybody bother to ask the Native Americans, the immigrant Hindus, Buddhists, Muslims, or Jews how they felt about having their beloved “Out Of Many” country suddenly become a church state? Did anybody even bother to ask the Christians, if, given all of the other things the country was fighting for, if we really wanted our troops to be fighting religious wars? Yet, here we are, 60 years after Eisenhower put a new motto on our money, and we have generations who simply can’t imagine otherwise.

DO YOURSELF A LITTLE FAVOR: Every time you see an American politician on the news ending a speech with “God Bless America” or a cop car with “In God We Trust” on the back – just ask yourself, “What does that type opportunistic religious grandstanding and pandering to the polls really look like overseas? What does an Iranian see? The Chinese? The Germans?”

For all the focus we give Islamic leaders for ending their speeches with “God Is Good,” well… take a look in the mirror, America. The only reason our motto didn’t become “God With Us” is because it was already taken… by the Nazis. (“Gott Mit Uns”) With all of the very *real* problems in the world, do we really need to invite division and hatred over who gets to claim (the same) God as theirs, and theirs alone? Come on, people – it’s 2016!

According to the latest major studies by Pew Research, America is becoming less and less “Christian” every day. So, the next time a politician awkwardly grabs the mic at the end of a speech to shout, “God Bless America,” I would just love to hear a crowd chant back, “E PLURIBUS UNUM!”

THINK ABOUT IT: Our founding fathers (who weren’t all Christian by any means) didn’t choose “E Pluribus Unum” by accident. Yet, they were able to agree on such an important motto of peace and harmony. (That is, right until it was all thrown out the window by the ruling religious majority of 1956) How many modern students have even been exposed to such a phrase and idea?

Now more than ever, e pluribus unum, our original motto – just as our founders intended.  Out of many, one! Pluralism at its finest, unity our only option. 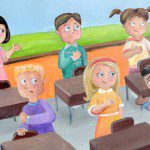 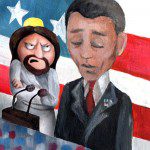 May 5, 2016 The National Day Of Prayer? (“Not so fast, hypocrites!” - Jesus)
Recent Comments
0 | Leave a Comment
""Why don't we see more evangelism betting directed towards animals...?"Well, because evangelism is directed toward ..."
Eberhardt von Hessen “When Your Ass Talks Back…” – ..."
"Could be. The rebels have their Star Wars and the Hindus have Shiva. All the ..."
Martin Zeichner Hell-o-ween: When Jesus Comes Knocking
"I would be scared of anyone that holds that kind of power. Power corrupts and ..."
Martin Zeichner Hell-o-ween: When Jesus Comes Knocking
""So, let me get this straight, Just Plain Phil - I illustrate a Bible verse ..."
Candy Smith Baby, It’s What’s For Dinner! (Wait! ..."
Browse Our Archives
get the latest from
Nonreligious
Sign up for our newsletter
POPULAR AT PATHEOS Nonreligious
1

Nonreligious
"God In Schools" Law Passed in Pennsylvania (But,...
Able To Choose 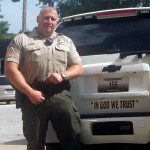 Nonreligious
"In God We Trust" - The Rise Of...
Able To Choose 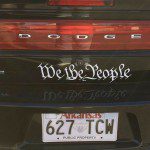 Nonreligious
"We The People" Adorned Police Cars - A...
Able To Choose