I’d post this to Facebook, but I can’t. While my Facebook page is regularly “reported” by Christians who don’t appreciate our illustrations of actual Bible verses, this is the first time I’ve actually had a post removed from and my personal Facebook account blocked for 24 hours (which is actually pretty impressive, considering how far we push the edge of the envelope at times).

This morning I shared a post from Progressive Secular Humanist titled, “Christian Pastor Calls Orlando Massacre ‘Good News’” in order to to illuminate that maybe, just maybe the systematic institutionalized bigotry toward homosexuals is not just a Muslim problem. Within minutes the post was removed and my Facebook pages were locked down for 24 hours. 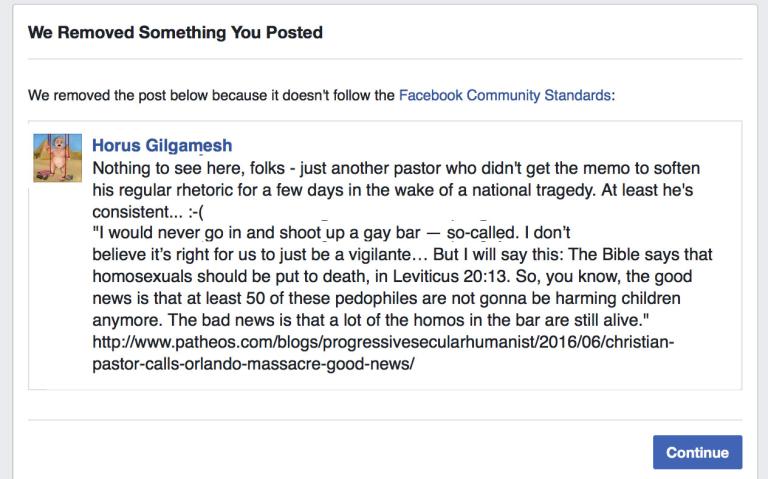 Meanwhile I see many Christian friends claiming to be persecuted because not everyone is excited to hear their prayers for victims in Orlando. Of course it is worth noting that these prayers come shortly after they boast about overturning gay marriage, likening homosexuals to pedophiles, and promoting candidates who promise to enact legislation that will give them the right to refuse service to homosexuals at their businesses.

I can certainly understand if Facebook has a desire to avoid controversy and create a “safe” online environment in deference to peace, love, and unity. I have been blown away by the support shown to the victims and loved ones reeling from the potentially avoidable slaughter in Orlando. However, if we aren’t allowed to discuss the possible root causes of bigotry, oppression, repression, and motivations for violent crimes against the innocent – how can we ever hope to avoid it in the future?

All day I’ve been seeing celebrity and media posts calling for bans on assault rifles; shared, re-shared, debated, argued, liked, and disliked – which is an extremely important conversation to be having! In fact, I actually shared a clip of Trevor Noah discussing gun regulations which is still visible. However, to suggest that maybe, just maybe religion might happen to play a role in transforming silent thoughts into violent actions that could lead someone to pull the triggers of those guns, and what… banned?

I’m hoping that Facebook’s action was the result of an automatic algorithm based on certain keyword combinations rather than editorial decisions to silence uncomfortable conversations. But… like I said, I’ve never been banned before over posts that were much more inflammatory. (I’ve contested the action but am still blocked.)

P.S. This is how these “reported posts” usually go:
1. I post an illustration of a Bible verse.
2. I receive automatic notifications that illustration has been “reported” to Facebook.
3. I personally respond to those offended.
4. I get called names, do my best to respond politely.
5. I get blocked by those who initiated the report in the first place.
<repeat> 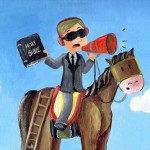 June 7, 2016
"You Are Good For Nothing" - Christianity's Convenient Condemnation Of Complete... Strangers
Next Post 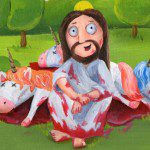 June 16, 2016 Why Did Jesus Slaughter The Innocent Unicorns?
Recent Comments
0 | Leave a Comment
""Why don't we see more evangelism betting directed towards animals...?"Well, because evangelism is directed toward ..."
Eberhardt von Hessen “When Your Ass Talks Back…” – ..."
"Could be. The rebels have their Star Wars and the Hindus have Shiva. All the ..."
Martin Zeichner Hell-o-ween: When Jesus Comes Knocking
"I would be scared of anyone that holds that kind of power. Power corrupts and ..."
Martin Zeichner Hell-o-ween: When Jesus Comes Knocking
""So, let me get this straight, Just Plain Phil - I illustrate a Bible verse ..."
Candy Smith Baby, It’s What’s For Dinner! (Wait! ..."
Browse Our Archives
get the latest from
Nonreligious
Sign up for our newsletter
POPULAR AT PATHEOS Nonreligious
1