“Evolution Is Just A Theory” – Mike Pence Argues To Congress 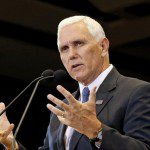 I am always impressed with how smoothly a trained lawyer can present “facts” without presenting any… facts. Below is CSPAN video of once-Congressman Mike Pence (who would later go on to become Governor of Indiana and the official Republican nominee for Vice President of the United States)  arguing against the “theory” of evolution on the Congressional floor in an attempt to reinsert creationism (masquerading under the new term “intelligent design”) back into public school – using the Bible as his source of…, what? Evidence?

There’s only one problem: Pence apparently has no idea what the term “theory” means within the scope of science. Or, even worse, he does know what a scientific theory is (like relativity or gravity), but, like many activist lawmakers and teachers I once had a part in influencing, he intentionally obfuscates the truth in order to creative a false narrative for an scientifically illiterate audience.

Speaking of scope, Pence is clearly still upset over the outcome of the famous Scopes “Monkey” Trial back in 1925 which eventually helped overturn Tennessee’s religiously motivated “Butler Act,” House Bill #185; “An act prohibiting the teaching of the Evolution Theory in all the Universities, Normals and all other public schools of Tennessee…”

“This theory made its way through litigation into the classrooms of America and we all have seen the consequence over the last 77 years.” – Rep. Mike Pence (full transcript from 2002 floor speech)

In fact, yes, we have seen the consequences – unbelievable breakthroughs in science and medicine, not the least of which being the Human Genome Project (completed the year after Pence’s speech), a feat not likely possible if activist religionist lawmakers (like Mike Pence) had been successful in suppressing SCIENCE from public classrooms in deference to religious folklore as fact.

What is most interesting to me is the blatantly confused disbelief (a byproduct of holding myopically religious views) that a textbook could ever need to be changed as new evidence presents itself throughout the course of scientific discovery. That’s not how science works, Mr. Pence, just religion.

“Science adjusts its views based on what’s observed. Faith is the denial of observation, so that belief can be preserved.” – Storm, Tim Minchin

With regards to Pence’s assertion about the founding fathers all believing in a ‘creator,’ I might just point out that, well… yeah, that’s because no science had yet been performed to suggest otherwise (and… they were all politicians). I might also remind readers that these men lived in a time not long after that of scientists being threatened with death for suggesting that round earth was not at the center of the universe – not because of any competing scientific theories, but… religion infecting the governments of the day.

Then again, maybe Pence would also like to outlaw heliocentric “theory” for geocentric “fact” because… the Bible?

My Apology: In truth, it isn’t even Pence’s views on evolution that are most troubling to me, it’s his manipulable gullibility as an elected leader, falling prey back in 2002 to an immense push by Evangelicals masquerading a new (made-up) field of “creation science” to reintroduce Biblical creationism back into public schools by using a fancy new name that might confuse critics – “intelligent design.” I was personally (hesitantly) involved with a couple of initiatives that targeted teachers and lawmakers to “teach the controversy” in order to present “intelligent design” as “another scientific theory” in public schools. I was wrong for preying on scientifically illiterate lawmakers like Mike Pence, but, well… he was an easy mark. 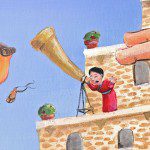 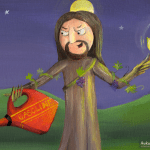 August 13, 2016 "Burn, baby - burn!" - Jesus Christ
Recent Comments
0 | Leave a Comment
Browse Our Archives
get the latest from
Nonreligious
Sign up for our newsletter
POPULAR AT PATHEOS Nonreligious
1