A Holy War In America?

These are the words of Franklin Graham (son of mega-evangelist Billy Graham) from his February 2014 article Ducking the Issue, which I can only describe as a battle cry for modern mainstream Christians to rise up and fight a new holy war of their own. It should be no surprise that evangelical leaders like Graham, Falwell, and Jefress along with candidates like Carson, Rubio, and Cruz made similar fear-mongering battle cries such a central theme to their 2016 campaigns to Get Out the (Christian) Vote. 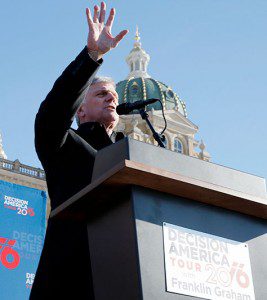 Using that week’s poster child of persecution for Biblically-backed intolerance as an example, Graham explained that the reason there was such backlash against the anti-gay and racially ignorant remarks made by Phil Robertson (of Duck Dynasty fame) was because “he brought them face to face with their sinful state.” Graham continues, “Christians and the Christian faith are under intense attack today,“ further claiming that the”worldly systems of politics, courts, entertainment and education can be instruments of devilish harm unless they are under the influence of Christian precepts and principles.”

It doesn’t take Graham long before he ramps up the all-too-familiar rhetoric of fear and persecution to assert,“the enemy of our souls is working his wicked schemes that seek to suppress and oppress believers,” going as far as to add a dramatic flair about the “rising tide of evil and iniquity that threatens to engulf our nation.” He then convicts his readers – challenging anyone who dares to call themselves Christians to stand up and fight against the “full-scale assault against Christianity and the followers of Christ.” (Of course, all of this amid apocalyptic ramblings about Satan becoming more fierce and controlling the liberal agenda because he knows he’ll be cast into a lake of fire soon, etc…) 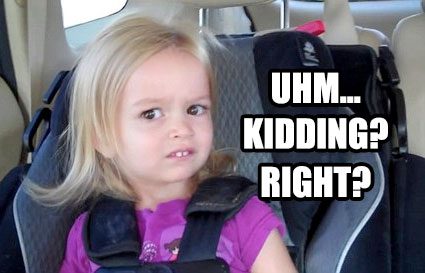 Think about that for a moment! Two people (complete strangers to Graham) are in love and, after living together for twenty years (in hiding, to avoid actual persecution) want to get married, and suddenly Graham’s fellow Christians are being marched to death camps? Talk about a persecution complex and dream of martyrdom!?!?

Here’s the problem – he’s not wrong (by Christian standards). I fully understand why Graham firmly believes that he is standing up for Christ by standing against homosexuals – much like opponents of the Civil Rights movement or Women’s Suffrage may have felt inspired to reaffirm oppression in the name of the Lord.  In short, he has been taught that he’s always right. After all, he is holding the manual to life right there in his hand. This isn’t to say that Graham is distorting the Bible’s teaching. He is absolutely preaching according to his Word of God. But, isn’t that just one of the problems with basing your life on a book that also supports slavery, rape, genocide, and abandoning your family to follow Christ?

By now, it should be no surprise that Graham ends his inspirational recruiting speech by quoting parts of the New Testament drafting orders to his new soldiers for Christ (as illustrated above):

All that said, Mr. Graham – if it is really a Holy War you want, well… be careful what you wish for.

A Plea To Christians: So, here we are two years later and for many Christians, the result of our recent election in the manifestation of a major battle that has just been won. However, if you don’t want to be seen as one of the same divisive power-seekers that speak on behalf of all Christians – it is your responsibility to stand against those who preach dangerous division on behalf of your chosen religion. Just like the Christians who used the Bible to oppose equal civil rights for people of different color or withholding the right to vote from those of a different gender, the Grahams, Falwells, Carsons, and Cruz’s will also find themselves on the wrong side of history – bringing shame not just on their family name, but on Christianity as a whole. In 50 years (hopefully much sooner), it will be Graham that the church apologizes for. Silence is agreement, folks – speak up.

P.S. This illustration (along with a different commentary) can be found in Vol. #2 of our Awkward Moments (Not Found In Your Average) Children’s Bible series of books for adults. 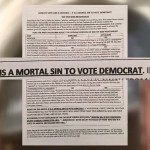 November 4, 2016
"It Is A Mortal Sin To Vote Democrat" - Church Bulletins
Next Post 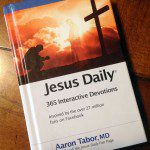 December 31, 2016 Living Without Jesus, Daily - A Book Review (In 365 Parts)
Recent Comments
0 | Leave a Comment
"Do you celebrate Hanukka? How bout Passover? Did you have a Bar mitzfvah? I could ..."
Defins Should The Old Testament Matter To ..."
"Then why are OT passages read at Mass?"
Andrea Fitzgerald Should The Old Testament Matter To ..."
""Why don't we see more evangelism betting directed towards animals...?"Well, because evangelism is directed toward ..."
Eberhardt von Hessen “When Your Ass Talks Back…” – ..."
"Could be. The rebels have their Star Wars and the Hindus have Shiva. All the ..."
Martin Zeichner Hell-o-ween: When Jesus Comes Knocking
Browse Our Archives
get the latest from
Nonreligious
Sign up for our newsletter
POPULAR AT PATHEOS Nonreligious
1

'Satanic' school head, pictured with a...
The Freethinker
Related posts from Able To Choose