How to criticize religion without being a bigot

How to criticize religion without being a bigot September 20, 2015 Matthew

I’m an atheist that acknowledges that religion can cause harm for many people and also can exacerbate many problems in our world. However, I’m not biased against religious people despite disagreeing with their belief system. How is this possible? Well, I think there is a pretty simple solution. We must criticize how the religious system is causing harm and refrain from personal attacks against religious people.

Atheists, like any group, have a few public figures that can shape the perception of the members at large. Bill Maher and Richard Dawkins are not strangers to ignorance and their biases against religious people have appeared again. Bill Maher states that the unjust arrest of Ahmed Mohomad was fair because Islam has “been one culture that has been been blowing shit up over and over again.”  Richard Dawkins even goes on to say that Ahmed may have wanted to get arrested because of all the positive attention he received. 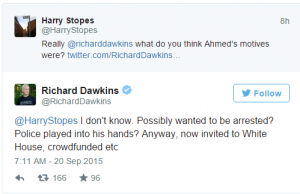 The faulty logic behind both of these statements is pretty obvious. However, I’d like to also point out that both Maher and Dawkins here are attacking people and not Islam here. Stating that Muslims are people that blow shit up or suggesting that Ahmed did this for attention certainly does not criticize religion in any productive way.

This is how atheists become bigoted towards religious people instead of keeping their criticisms to the belief system. Having a nuanced anti-theism position is difficult because religion can cause problems, but we shouldn’t create biases against people who adhere to the beliefs we find harmful. I think it’s very possible to call out religious harm while refraining from bigotry; however, it requires self-reflection and strong skepticism.

There are many atheists who are not strong skeptics. Part of being a skeptic is understanding that we all have biases. For example, an atheist may have been harmed by religion and allows their anger towards religion to spread to religious people as well. This is a problem, but if this same atheist understands that everyone has biases (skepticism) and makes a strong effort to correct them (self-reflection) then that same atheist can be against religion without being against religious people. I admit keeping our emotions in check against religion can be difficult when we see aggravating things happening related to religion (i.e. Kim Davis, the defunding of Planned Parenthood, Westboro Baptist Church, etc), but attacking religious people isn’t the way to go. I hope to see fewer atheists make the kind of juvenile attacks Maher and Dawkins do here and even work with religious allies to reduce the harms of religion through interfaith work and religious reform movements. 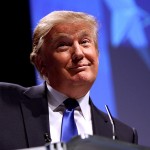 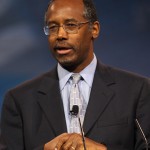 September 23, 2015 Why you should stop calling Republicans stupid
Recent Comments
0 | Leave a Comment
"Take care, mate!"
Jonathan MS Pearce My Final Blog Post: Reflections on ..."
"Happy trails, Matthew. It has been a pleasure reading you here."
Pam My Final Blog Post: Reflections on ..."
"meet the new boss... https://uploads.disquscdn.c..."
al kimeea Why This Progressive Is Excited to ..."
"Another upset Islamophobe. I imagine successful Muslims scare you."
JS Stop calling Reza Aslan a fraud ..."
Browse Our Archives
get the latest from
Nonreligious
Sign up for our newsletter
POPULAR AT PATHEOS Nonreligious
1

Russell Moore and the Leaked Letters:...
Roll to Disbelieve
Related posts from According To Matthew