The Atheist Alliance of America Conference was fantastic, but there was some conflict with the Women of Color Ministries Conference that happened at the same time as ours.

Now, I’m no stranger to calling out atheist’s poor behavior, but every atheist I saw at our conference treated the Christians there with kindness and respect. Unfortunately, this respect was not returned to us by many of those same Christians. As Amy Monsky observed, these Christians called us evil and attempted to pray over us without our consent to get the “demons” out of us. Some Christians shot us nasty looks and even some muttered insults as they walked by. However, the video below shows how aggressive one woman decided to be against our group and of black non-believers in particular.

A black Christian woman approached Mandisa Thomas and immediately began insulting her. This woman told Mandisa that she had a “slave mentality” for simply being an atheist and also called white atheists “white demons.”

It was admirable how Mandisa could keep her composure while defending the attacks thrown at us. This event demonstrated another example of Christian privilege (can you imagine the media attention if atheists behaved this way), but also the important intersection of race and religion.

Garrett Lovejoy also recorded some of the altercation.

As a white man, I cannot possibly understand the discrimination people of color still face today. However, this explicit example definitely showed me another aspect of my privilege. I will never be seen as a “race traitor” for simply being an atheist.

Peter Mosley describes how churches are especially important for the black community in this insightful article. Basically, Mosley points out how churches provide social benefits for everyone, but such benefits are especially important for marginalized groups. Thus, if a black atheist leaves their church, they are seen as turning their back to their entire community and their own race. Mosely concludes how the atheist community, being mostly white men, has little to offer black atheists who leave their church.

Mandisa was kind enough to provide me with a quote on how race impacts the atheist community and you can read more of her story in Mandisa’s article for CNN.

“It is a nice idea for race not to matter in the secular community. However, many who say they don’t ‘see race’ will dismiss the difficulties that non-whites face within our respective communities. We acknowledge that being an atheist can be challenging in general. But there are often additional barriers that come with being a person of color.

This is a major reason why groups like Black Nonbelievers were created – to help those who need such support find it, and to help both the black and secular communities understand a few things: 1) that we DO exist, 2) that what we go through can be harrowing, and 3) that it will take all of us to help break misconceptions, and to work together towards common goals.”

Being an atheist can be tough; however, being white helps me yet again as it’s simply easier to be a white atheist than a black one. Not only will I not be called a “race traitor” for leaving my church, I can go into the atheist community and still be the majority.

People of color who leave their religion risk being ostracized by their religious friends, but they also will become a minority within a minority. While us white people can be sympathetic of the discrimination people of color deal with, we will most likely never experience anything close to it. However, we can listen to the experiences of people of color, support groups like Black Nonbelievers, and keep learning how to become better allies. 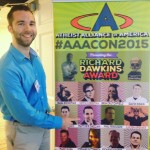 October 19, 2015
Highlights from the Atheist Alliance of America Conference
Next Post 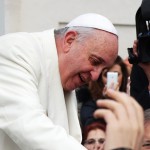 October 24, 2015 Half of Americans think churches should be involved in science policy
Recent Comments
0 | Leave a Comment
"Take care, mate!"
Jonathan MS Pearce My Final Blog Post: Reflections on ..."
"Happy trails, Matthew. It has been a pleasure reading you here."
Pam My Final Blog Post: Reflections on ..."
"meet the new boss... https://uploads.disquscdn.c..."
al kimeea Why This Progressive Is Excited to ..."
"Another upset Islamophobe. I imagine successful Muslims scare you."
JS Stop calling Reza Aslan a fraud ..."
Browse Our Archives
get the latest from
Nonreligious
Sign up for our newsletter
POPULAR AT PATHEOS Nonreligious
1

How Hell Developed in Early Christian...
Roll to Disbelieve
Related posts from According To Matthew