Bernie Sanders gives beautiful answer when asked about his spirituality

Bernie Sanders has talked before about his religion is that “we are all in this together.” However, at the South Carolina Town Hall event he gives a much more detailed response. I found Bernie’s reply to be particularly moving and it really resonated with me. Whether you like Bernie or not, I hope we can all agree that we need more of this kind of authenticity and compassion in politics. Here is the transcript from Bernie’s response as well as the video:

“Every great religion in the world — Christianity, Judaism, Islam, Buddhism — essentially comes down to: ‘Do unto others as you would have them do unto you.’ And what I have believed in my whole life — I believed it when I was a 22-year-old kid getting arrested in Chicago fighting segregation — I’ve believed it in my whole life.

That we are in this together — not just, not words. The truth is at some level when you hurt, when your children hurt, I hurt. I hurt. And when my kids hurt, you hurt. And it’s very easy to turn our backs on kids who are hungry, or veterans who are sleeping out on the street, and we can develop a psyche, a psychology which is ‘I don’t have to worry about them; all I’m gonna worry about is myself; I need to make another 5 billion dollars.’

But I believe that what human nature is about is that everybody in this room impacts everybody else in all kinds of ways that we can’t even understand. It’s beyond intellect. It’s a spiritual, emotional thing. So I believe that when we do the right thing, when we try to treat people with respect and dignity, when we say that that child who is hungry is my child … I think we are more human when we do that, than when we say ‘hey, this whole world , I need more and more, I don’t care about anyone else.’ That’s my religion. That’s what I believe in.

And I think most people around the world, whatever their religion, their color — share that belief. That we are in it together as human beings. And it becomes more and more practical. If we destroy the planet because we don’t deal with climate change … Trust me, we are all in it together, and … That is my spirituality.” 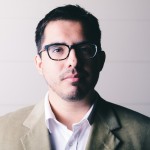 February 23, 2016
What can atheists and Catholics learn from each other?
Next Post 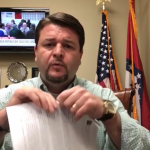 February 24, 2016 Arkansas Senator rips up letter asking for separation of church and state
Recent Comments
0 | Leave a Comment
Browse Our Archives
get the latest from
According To Matthew
Sign up for our newsletter
POPULAR AT PATHEOS Nonreligious
1

Meet the Christian couple who believe they can...
A TRIBUNAL in Australia is scheduled to hear a 'persecuted Christians' case...
view all Nonreligious blogs
What Are Your Thoughts?leave a comment
Copyright 2008-2020, Patheos. All rights reserved.