The Republican National Convention has certainly been interesting so far, but among the chaos was some clear plagiarism from Melania Trump’s speech. The video below shows how Melania copied parts of Michelle Obama’s 2008 speech almost verbatim.

Yes, this was a small part of the overall speech, but it doesn’t look good at all (and extremely unlikely to be an accident). It’s almost like Melania Googled speeches of first ladies of the United States and took a part she liked from a recent one. I don’t know much about Melania, but I do know that she tells people she graduated from college when she actually dropped out after her freshman year. This blatant plagiarism seems to be around the level of a college freshmen looking to cut corners.

The Trump campaign did respond to these accusations of plagiarism with the following statement:

“This is once again an example of when a woman threatens Hillary Clinton, she seeks out to demean her and take her down. It’s not going to work”

Yes, they think Hillary Clinton is somehow responsible for making parts of Melania Trump’s speech sound very similar to Michelle Obama’s 2008 speech. It’s just deflecting the question and it would be nice to see the Trump campaign admit that they may have made a mistake. Sadly, I doubt many of Trump’s supporters even care if Melania copied Michelle’s speech. They continue to support Trump and all his lies as long as he keeps saying the bigoted, overly simplistic things they want to hear. 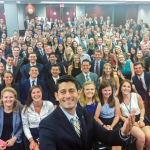 July 17, 2016
This Photo Illustrates the Republicans' Problem with Racial Diversity
Next Post 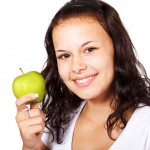 July 20, 2016 Five reasons why you should love GMOs
Recent Comments
0 | Leave a Comment
"Take care, mate!"
Jonathan MS Pearce My Final Blog Post: Reflections on ..."
"Happy trails, Matthew. It has been a pleasure reading you here."
Pam My Final Blog Post: Reflections on ..."
"meet the new boss... https://uploads.disquscdn.c..."
al kimeea Why This Progressive Is Excited to ..."
"Another upset Islamophobe. I imagine successful Muslims scare you."
JS Stop calling Reza Aslan a fraud ..."
Browse Our Archives
get the latest from
Nonreligious
Sign up for our newsletter
POPULAR AT PATHEOS Nonreligious
1