Jill Stein: “The killing of Harambe reminds us to be a voice for the voiceless.”

Jill Stein: “The killing of Harambe reminds us to be a voice for the voiceless.” August 30, 2016 Matthew

The killing of Harambe 3 months ago today reminds us to be a voice for the voiceless. https://t.co/wMZpWlLicY pic.twitter.com/8WtlDhRlIy

The tweet also linked to a campaign statement that said the Green Party is against keeping primates in zoos.

“While good emergency staff training might have prevented such a catastrophic outcome, the Green Party believes that captivity for such entertainment is ethically wrong and fundamentally exploitive and should be illegal.”

The Harambe tweet seemed oddly timed given that it was also the anniversary of both the March on Washington and the killing of Emmett Till. A common criticism regarding the internet’s fascination with Harambe was that white people were more concerned about a gorilla than racial violence and police brutality. However, Jill addressed this as well:

But this Tweet came across as rather naive too. Of course a popular internet meme is going to gather more attention than a third party candidate vaguely calling to “end racism.” Maybe some actual plans to address the problem would be better than a white person saying we need to stop being racist.

I can’t tell you why Jill Stein’s campaign thought these tweets would be a good idea. It seems like exploitation of the popular gorilla, which is a strange strategy to adopt. Whatever the reason, it doesn’t seem to be helping Stein’s campaign as she is actually trailing Harambe in the polls. 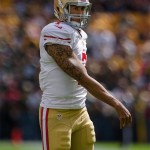 August 30, 2016
Colin Kaepernick's freedom of speech is what our troops fought for
Next Post 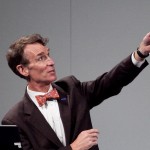 August 31, 2016 Bill Nye the Science Guy will have a new show on Netflix
Recent Comments
0 | Leave a Comment
Browse Our Archives
get the latest from
According To Matthew
Sign up for our newsletter
POPULAR AT PATHEOS Nonreligious
1