Social media is a wonderful way to access a great deal of information and connect with new people. However, because information is so easily accessible, fake news can spread like wildfire. This was particularly apparent during the the 2016 election season. False claims like “Pope Francis Endorses Donald Trump” or “Hillary’s emails connected to murder” were shared all over Facebook and Twitter. These fake news stories were so popular that they received more attention than real news by the end of the election.

In this graphic from Buzzfeed you can see how Facebook engagement of fake news actually surpassed mainstream news! 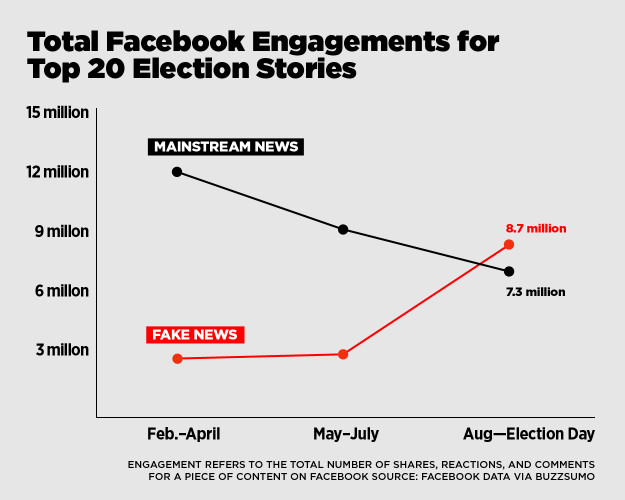 It’s very depressing and terrifying to see how much attention such fake news received. Now some of these engagements may have been people questioning the truth of such articles, but there were still many people who believed them. Furthermore, psychological research reveals that if you repeat a lie enough times, people will start to believe it. How might this have impacted the election?

The Washington Post recently interviewed Paul Horner, a man who writes these false stories to make money. He thought his fake stories may have helped elect Donald Trump:

Washington Post: You’ve been writing fake news for a while now — you’re kind of like the OG Facebook news hoaxer. Well, I’d call it hoaxing or fake news. You’d call it parody or satire. How is that scene different now than it was three or five years ago? Why did something like your story about Obama invalidating the election results (almost 250,000 Facebook shares, as of this writing) go so viral?

Paul Horner: Honestly, people are definitely dumber. They just keep passing stuff around. Nobody fact-checks anything anymore — I mean, that’s how Trump got elected. He just said whatever he wanted, and people believed everything, and when the things he said turned out not to be true, people didn’t care because they’d already accepted it. It’s real scary. I’ve never seen anything like it.

Washington Post: You mentioned Trump, and you’ve probably heard the argument, or the concern, that fake news somehow helped him get elected. What do you make of that?

Paul Horner: My sites were picked up by Trump supporters all the time. I think Trump is in the White House because of me. His followers don’t fact-check anything — they’ll post everything, believe anything. His campaign manager posted my story about a protester getting paid $3,500 as fact. Like, I made that up. I posted a fake ad on Craigslist.

There are many reasons why Donald Trump was elected, but I would say the spreading of fake news may have been a factor. Hillary Clinton certainly had many lies spread about her that were completely untrue, which didn’t help her perceived trustworthiness. Regardless of your political ideology, we should care about truth. It’s tempting to share that attention grabbing news article, especially if it confirms our beliefs. But if we just took a few more seconds to fact-check and source-check, we could be a much more informed society. 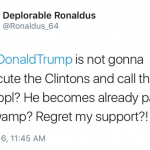 December 5, 2016
Trump supporters are already expressing their regret
Next Post 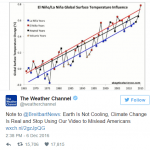 December 6, 2016 The Weather Channel Calls Out Breitbart News For Spreading Climate Change Hoax
Recent Comments
0 | Leave a Comment
Browse Our Archives
get the latest from
Nonreligious
Sign up for our newsletter
POPULAR AT PATHEOS Nonreligious
1