What did a Muslim comedian learn from sitting next to Eric Trump during his flight?

What did a Muslim comedian learn from sitting next to Eric Trump during his flight? December 9, 2016 Matthew

Mohammed Amer was on his way to Scotland for a comedy tour when he found out he was upgraded to first class. Sitting next to him was Eric Trump, son of the President-elect. Amer shared his story about talking to Trump Jr. with the Huffington Post. Amer’s first thought was that this could be a great opportunity for more comedy material, but ended up having a better conversation than he thought he would.

Amer recounted some of the first things he said to Eric Trump:

“You don’t even know how fantastic this is for me. I’m a Muslim named Mohammed who happens to be a stand-up comedian, and I’m sitting next to you. Its perfect.”

After that introduction, Amer kindly explained to Trump something that was bothering him.

Eric Trump told Amer that they were not planning on doing anything like that. They then joked about how Amer and other comedians were not going to go easy on his dad. But what struck me most was this part of the interaction:

Amer told Huffington Post: “The vibe that I got was that it was all a game [to the Trumps], This whole thing was a game. I don’t think there’s any regret about what they’re doing and what they had to do to win.”

Eric Trump also seemed disconnected about the anguish of hate crimes going through the country. When Amer told Trump Jr. that his dad was playing the media “like a fiddle” Eric just simply agreed with him. It really does seem like the Trumps are very aware of the “game” they are playing and simply do not care.

Amer did have some positive things to say about the conversation however:

“We need to [be able to] talk about these things intelligently and work through the problems and find the solutions. Not more chaos and more hate between us.”

Hopeful words from Amer, a man who definitely has to worry about the anti-Muslim rhetoric spouted off by Trump. Talking to people in a way that doesn’t make them defensive is important for changing their minds, but it can be difficult to remain calm when people’s lives are at stake. 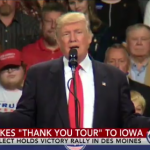 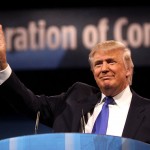 December 12, 2016 Donald Trump says he doesn't need daily intelligence briefings
Recent Comments
0 | Leave a Comment
Browse Our Archives
get the latest from
Nonreligious
Sign up for our newsletter
POPULAR AT PATHEOS Nonreligious
1

US Muslims say 'don't compare Texas'...
The Freethinker
Related posts from According To Matthew