Texas Bill Aims To Take Away Voting Rights From Women Who Have Abortions January 16, 2017 Matthew

Women’s reproductive health will be under constant attack under a Trump presidency and a majority Republican House and Senate. Another example of this was recently seen in the Texas Bill 948, which would make abortion a felony, and consequently take away women’s right to vote.  The bill was introduced by Republican representative Tony Tinderholt.

The bill argues that a fetus is a “living human child” and that having an abortion would be considered homicide. As the Texas Observer reports, this bill removes the state’s exception for abortion for homicide. There are no exceptions for rape or fetal abnormalities. So basically, if a woman tries to have an abortion, she will be considered a felon and lose her right to vote.

Thankfully, this bill seems pretty unlikely to become a law as it goes against Roe vs Wade. However, Trump’s promise to appoint anti-abortion Supreme Court judges will make bills like these much scarier.

People with uteri have the right to safe and legal abortion and we must continue to fight to protect that right under Trump. We must support pro-choice legislators and organizations as we brace ourselves for the next four years. 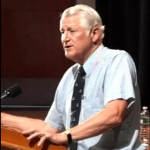 January 16, 2017
Republican Arrested After Grabbing Woman By Her Genitals
Next Post 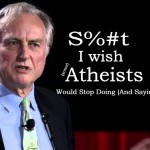 January 17, 2017 An Atheist Responds to "S%#t I Wish (Some) Atheists Would Stop Doing (And Saying)"
Recent Comments
0 | Leave a Comment
"Take care, mate!"
Jonathan MS Pearce My Final Blog Post: Reflections on ..."
"Happy trails, Matthew. It has been a pleasure reading you here."
Pam My Final Blog Post: Reflections on ..."
"meet the new boss... https://uploads.disquscdn.c..."
al kimeea Why This Progressive Is Excited to ..."
"Another upset Islamophobe. I imagine successful Muslims scare you."
JS Stop calling Reza Aslan a fraud ..."
Browse Our Archives
get the latest from
Nonreligious
Sign up for our newsletter
POPULAR AT PATHEOS Nonreligious
1

Of Hybrid Embryos, Human Rights, and...
Roll to Disbelieve
Related posts from According To Matthew