May 10, 2017 by Matthew
0 Comments
Bill O’Reilly Attacked His Ex-Wife After She Caught Him Having Phone Sex According to Affidavit May 10, 2017 Matthew

Bill O’ Reilly continues to look like more and more of a monster. We’ve heard about him choking his wife and sexually harassing women and now more stories are coming out.

According to an affidavit from his divorce proceedings, O’Reilly was caught having phone sex and then brutally attacked his ex-wife. As J.K. Trotter of Jezebel reports:

According to McPhilmy’s account, she discovered O’Reilly engaging in phone sex in their bedroom at roughly 10:30 p.m. one evening. O’Reilly then “flew into a fit of rage” and slammed her into a nearby wall, leaving a hole one foot across. He then, the affidavit claims, wrapped his arms around her shoulders, neck, and hands to immobilize her, and violently dragged her out of the bedroom and down a hallway on the second floor of their 4,600-square-foot, $2.4 million home in Manhasset, New York.

O’Reilly went on, the affidavit claims, to drag McPhilmy by the neck down a flight of stairs and through the kitchen, as McPhilmy screamed that he was hurting her. In the kitchen, the affidavit claims, a security guard assigned to protect O’Reilly and his family saw what was going on, at which point O’Reilly stopped the attack. When the guard asked her if she wanted to report the incident to the police, she declined, McPhilmy added.

The guard was startled by O’Reilly’s appearance, McPhilmy wrote, because he was naked from the waist down while attacking her.

After all the harmful nonsense Bill has spread over the years, I’m happy to witness his downfall. I just feel bad for the women he abused and I’m glad their stories are finally getting heard. 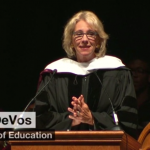 May 10, 2017
Betsy DeVos Booed During Commencement Speech
Next Post 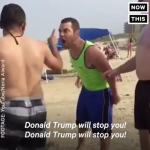