Missouri has definitely tried to restrict abortion access over the years. In fact, they were down to their last abortion clinic in the entire state this year. But, thanks to The Satanic Temple and Planned Parenthood, access to reproductive health is actually vastly improving. Recently, a second abortion provider has opened its doors in Missouri and two others plan on following soon.

Missouri was dealing with many regulations on abortion which closed down several clinics. One of these major restrictions was the absurd law that abortion clinics must meet the same surgical center standards as full hospitals. But Planned Parenthood fought this and a federal court sided with them. Now after state inspections, Planned Parenthood hopes to reopen two locations that previously didn’t meet the strict regulations that are no longer needed. This is actually somewhat unlikely as other states have had difficulty reopening the clinics even after the regulations are no longer a law.

Pressure from Planned Parenthood, women’s rights groups, and The Satanic Temple may have provided enough pressure of Missouri legislators to make this happen. One of The Satanic Temple’s tenets is that “One’s body is inviolable, subject to one’s own will alone.” Thus, abortion restrictions definitely violate this aspect of their religion.

The Satanic Temple has been involved with lawsuits for years in Missouri fighting their anti-abortion regulations. The Satanic Temple has previously challenged Missouri’s absurd 72 waiting period in between initial consultations and second appointments, which is an unnecessary inconvenience for the person trying to get an abortion. The Satanic Temple also tried to get a religious waiver for a female Satanist who tried to circumvent this extra requirements because it violated her religion. A judge eventually tossed out the case because the Satanist was no longer pregnant.

So this is actually some good news regarding reproductive rights in Missouri. We should celebrate these inspiring activists doing such important work in a very anti-choice state. 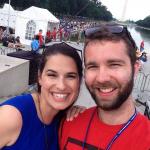 September 13, 2017 Talking Nerdy with Cara Santa Maria
Recent Comments
0 | Leave a Comment
"Take care, mate!"
Jonathan MS Pearce My Final Blog Post: Reflections on ..."
"Happy trails, Matthew. It has been a pleasure reading you here."
Pam My Final Blog Post: Reflections on ..."
"meet the new boss... https://uploads.disquscdn.c..."
al kimeea Why This Progressive Is Excited to ..."
"Another upset Islamophobe. I imagine successful Muslims scare you."
JS Stop calling Reza Aslan a fraud ..."
Browse Our Archives
get the latest from
Nonreligious
Sign up for our newsletter
POPULAR AT PATHEOS Nonreligious
1