Kellyanne Conway has regularly spouted off alternative facts with her platform, but today on Fox News she hit a new low. While discussing the Pittsburgh Synagogue shooting, Conway actually blamed nonreligious Americans for the violence. She said:

The anti-religiosity in this country that’s somehow in vogue and funny to make fun of anybody of faith, to constantly be making fun of people who express religion—the late-night comedians, the unfunny people on TV shows—it’s always anti-religious.

And remember these people were gunned down in their place of worship, as were the people in South Carolina several years ago. And they (the victims) were there because they’re people of faith and it’s that faith that needs to bring us again. This is no time to be driving God out of the public square, no time to be making fun of people.

That time Kellyanne Conway, a Christian, whose faith has *actually* persecuted Jews for centuries, opportunistically appropriates the mass deaths of Jews this week to pander the *fake* Persecution Complexes of Trump’s evangelical Christian base. Charming. pic.twitter.com/KxMUXEQFAD

Just amazing. And not only does she blame the Synagogue shooting on “anti-religious” people, she throws in the South Carolina shooting as well.

Importantly, the Pittsburgh Synagogue shooter was a Christian! He had a Bible verse in his social media profile that said Jews were the children of Satan!

Christians are the ones who have actually been treating Jews terribly for centuries, not atheists. It’s awful how someone with such a large platform can spout off such harmful falsehoods.

And yet, it’s not surprising. That’s been typical since “alternative facts.” Sadly, Conway and other Republicans know that they can just say anything that makes their base feel good and the evidence doesn’t matter. But in the wake of such tragedy, spreading such nonsense seems particularly awful.

If you’d like to support the families of the victims of the shooting, you can do so by following this link. 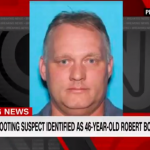 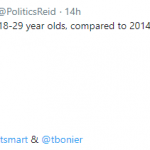 November 3, 2018 Number Of Young And New Voters Skyrocket In Early Voting Compared To 2014
Recent Comments
0 | Leave a Comment
"Take care, mate!"
Jonathan MS Pearce My Final Blog Post: Reflections on ..."
"Happy trails, Matthew. It has been a pleasure reading you here."
Pam My Final Blog Post: Reflections on ..."
"meet the new boss... https://uploads.disquscdn.c..."
al kimeea Why This Progressive Is Excited to ..."
"Another upset Islamophobe. I imagine successful Muslims scare you."
JS Stop calling Reza Aslan a fraud ..."
Browse Our Archives
get the latest from
Nonreligious
Sign up for our newsletter
POPULAR AT PATHEOS Nonreligious
1