A new paper published in the Journal of Religion in Society conducted a thematic analysis of why atheists converted to Christianity. The authors were Joseph Langston, Heather Albanesi, and Matthew Facciani. Yes, that last one was me!

I’ve been an open atheist for years, but that doesn’t mean I would avoid academic work on why atheists stopped being atheists. It was an interesting question that hasn’t been looked at much in the academic literature so I was excited to help out on it!

Basically, our study looked at existing qualitative data from social media sites like Reddit and Quora. We tried to find forums that asked formerly self-identified atheists why they became a Christian. Yes, this is a very limited approach since we don’t know anything about these social media users, but this was an exploratory study.

We ended up finding 111 online narratives from former atheists who openly discussed why they “converted” to Christianity. Of these narratives, we identified 10 key themes that emerged in our thematic analysis. Below are the 10 themes along with the percentage of times they appeared in the narratives.

• Intellectualism (50%): use of rationalism, debate, arguments, and critical thinking.

• Openness to Experience (30%): an attitudinal disposition of willingness to examine different ideas; to be open to another view possibly being true.

• Authentic Example (28%): finding Christians or Christianity to be inspiring or impressive; axiological or aesthetic influence.

• Religious Study (25%): extra-biblical study of Christianity, and of non-Christian religions.

• Contra Atheism (24%): experiencing a sense of “worldviewlessness,” or of being ungrounded in the larger scheme of existence, e.g. existential despair.

Here is an example of what we coded “numinous experience”:

I had an amazing friend who would pray with me everyday when I was a
freshman in high school. At first it was a little cringe-y and I would just go
along with it out of respect. But as it went on, I really just had an opening of
the heart that I can’t explain. It suddenly became obvious how wrong I had
been the whole time and my faith began to grow not by own will. She never
even talked about a lot of theology or apologetics or any kind of argument, but
would just pray for me. I seriously went from being completely convinced of
atheism to Christian.

Here is an example of what we coded “hardship”:

I was clinically depressed, was suffering from panic attacks frequently, and
everyday was a titanic struggle with never-ending anxieties. I “knew” that my
problems were just chemicals in my brain that I could overcome by my own
power. So I tried every tactic that I could think of to beat the anxiety. Yet,
nothing worked. My intelligence and abilities, upon which I had always relied,
failed me utterly, and so I faced a choice: “Either I commit suicide and die, or
I try to believe in God.”

It’s important to note again that these open-source accounts are completely volunteered. And despite a potential bias to present a strong argument for believing in God, there was often a clear social connection or emotional hardship that was linked to their belief change.

We know that religiosity can reduce anxiety by providing a meaning framework.  We also know that social influence can be powerful in shaping our religious beliefs.  So I wasn’t surprised these results reflected so much social and emotional influence.

The “intellectualism” component often involved discussion with others and it is hard to say how much social influence played a role in these accounts that did not mention social influence. That is why future studies can have much more structured interviews that allow us to tease apart potential mechanisms and co-factors that drive one’s loss of atheism.

Finally, I’d like to point out that just because these atheists converted to theism, that doesn’t mean they were never “true” atheists. Beliefs change! This study cannot speak of any larger trends as we were interested in micro-level processes that change beliefs. Despite these narratives describing their new religiosity, the United States is becoming less religious overall.

I look forward to seeing future studies expand on this idea and create a more scientific and nuanced approach for understanding why atheists lose their atheism. 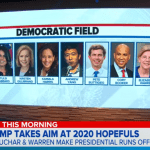 February 21, 2019 Liberals Need To Work Together If They Want To Defeat Trump In 2020
Recent Comments
0 | Leave a Comment
"Take care, mate!"
Jonathan MS Pearce My Final Blog Post: Reflections on ..."
"Happy trails, Matthew. It has been a pleasure reading you here."
Pam My Final Blog Post: Reflections on ..."
"meet the new boss... https://uploads.disquscdn.c..."
al kimeea Why This Progressive Is Excited to ..."
"Another upset Islamophobe. I imagine successful Muslims scare you."
JS Stop calling Reza Aslan a fraud ..."
Browse Our Archives
get the latest from
Nonreligious
Sign up for our newsletter
POPULAR AT PATHEOS Nonreligious
1