I made myself sit through another debate and felt like sharing some of my brief thoughts I had for each candidate. These debates are interesting to follow because you can look at it through two approaches 1) did the candidate galvanize their supports and 2) did they attract any new undecided voters. Most of the time candidates will do well in the first point, but the second point is much harder.

Biden absorbed some of the early attacks. However, it didn’t look good when Joe constantly brought up Obama, but then said “I’m the vice-president” when Obama was criticized. I didn’t think the callout by Castro was a big deal. It felt like more of the media to create controversy. Biden had a few gaffes as usual, but did okay.

Bernie really did a lot of the same stuff as he usually does. Raving against the top 1%. Nothing really stood out to me, but no big mistakes either.

Warren, as usual, just comes across as charismatic and competent. Her personal stories gave her a nice touch to the usual thoughtful statements she gives. I liked how she mentioned corruption being a big issue regarding gun issues and gave a specific point about filibuster. Her answers on education are great as well.

Harris did fine. But she didn’t do anything that made her stand out and kept mentioning Trump instead of specific ideas she has. Why is her campaign different than the others? Nothing jumped out to me that made me feel like she is offering new ideas. Also, when asked about her time as a prosecutor, she deflected away from taking blame for some of the awful things she did.

Pete did okay. His closing remarks about coming out were inspiring. But as far as separating himself from others, I don’t think he made any strong case. Also, the zinger he tried to make about “hey guys let’s stop fighting” did not land at all because the “fighting” was mostly about policy ideas and wasn’t even anything personal.

I really don’t even like Beto. He often comes across as a typical vapid and narcissistic politician. But I admit, his performance last night stood out. Strong answers on immigration and gun control. It’s interesting that he is a more moderate candidate, but does a good job staying strong with gun control. Definitely has charisma and that could help get votes from moderate Democrats.

I thought Cory had a strong debate as well. Really good answer on race that offered specific solutions. Also did a good job on gun control issues and was the only one to focus on veterans. Good charisma and humor while also remaining strong on the issues.

Klobuchar did just okay and unfortunately really didn’t do anything memorable. Her closing statement about fighting the healthcare system as a mom was good. But I doubt her appeal to moderates at this stage is going to help her get Democratic votes. I liked that she mentioned the importance of taking guns away from domestic abusers, but ak-47s are not the guns often used to kill one’s spouse.

So the whole #YangsBigSurprise was him giving away $12,000 to 10 families from campaign funds. Which is technically legal, but I can see why it would give some voters concern. Ultimately, I’m okay with this because he’s not requiring any of these people to vote or donate to him. The main point is advertising. He can broadcast how his freedom dividend would help people. And it gets the talking heads to mention him more. So it was a solid approach even if it is somewhat gimmick-y. His opener will be what is remembered, but his other answers were fine and he answered the education question very well. His answer about military experience was fairly weak though.

A lot of focus on Trump. And people kept mentioning his “attack” on Biden, which again, I didn’t think was a big deal. He looked strong at certain points, but nothing else really stood out to me. He may have needed something more memorable, but other than the mild attack of Biden, there wasn’t much else. 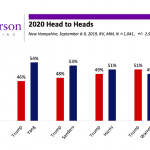 November 4, 2019 Andrew Yang Would Be A Great Matchup Against Donald Trump
Recent Comments
0 | Leave a Comment
"Take care, mate!"
Jonathan MS Pearce My Final Blog Post: Reflections on ..."
"Happy trails, Matthew. It has been a pleasure reading you here."
Pam My Final Blog Post: Reflections on ..."
"meet the new boss... https://uploads.disquscdn.c..."
al kimeea Why This Progressive Is Excited to ..."
"Another upset Islamophobe. I imagine successful Muslims scare you."
JS Stop calling Reza Aslan a fraud ..."
Browse Our Archives
get the latest from
Nonreligious
Sign up for our newsletter
POPULAR AT PATHEOS Nonreligious
1

Joe Rogan 'Ivermectin Is The Red...
Laughing in Disbelief
Related posts from According To Matthew