Why This Progressive Is Excited to Vote for Biden/Harris

Why This Progressive Is Excited to Vote for Biden/Harris August 22, 2020 Matthew

I’ve been critical of Joe Biden (and the DNC), but I am honestly excited to vote for a Biden/Harris ticket at this point. Trump and his administration has been a disaster. Their incompetence has become most salient during their complete mishandling of the Covid-19 pandemic. The constant de-legitimization of our federal agencies and democratic process should worry any American. The polarization from Trump’s team is also not sustainable. Biden will at least appoint competent people around him to get through this crisis. The country is in such a bad place and before we even think about progressive reform, we need stabilize where we are.

Also, Biden and Harris do have positive qualities that I am excited to vote for beyond just being “Not Trump.” While Biden is much more conservative than I would like, one positive quality is that he can be pushed to the left. He has been working with progressives. There is hope. I agree with activist Angela Davis here:

Another great quality of Biden is his empathy and ability to connect with people. Biden makes people feel like he is listening to them and is not coming from a place of elitism. Just watch this video of 13-year-old Brayden Harrington who was encouraged by Joe Biden to overcome his stuttering. Kindness and decency are qualities that I would like to see in our President.

Regarding Kamala Harris, there is legitimate criticism of her record as a prosecutor, but I also think it’s important to take into account what the political climate was like at the time. Harris was the first woman of color elected as California attorney general and this certainly would make it more difficult for her to stray from the mainstream. Furthermore, when we look at her record as a Senator, it is very progressive. In fact, Harris was actually ranked as the most liberal senator in 2019.  While she has flaws, Harris certainly has a lot of qualities progressives should be excited about in addition to being a strong, competent person who could lead if necessary.

Finally, I am sympathetic to the concerns of people who want to vote 3rd party, but I strongly disagree with them. I don’t think we are in a position to weather another 4 years and hope we can change things with a more progressive candidate next time. It will be much harder to enact progressive change then (assuming the country still functions after another 4 years of Trump). Third party supporters are great at diagnosing the problems, but their plan for what happens next is often lacking. It is very hard to predict the future so I think we should focus on what we can change now. 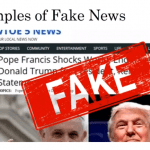 August 1, 2020
Psychological Factors That Influence The Spread of Fake News
Next Post

November 27, 2020 Five Steps to Help Have Productive Political Discussions
Recent Comments
0 | Leave a Comment
Browse Our Archives
get the latest from
Nonreligious
Sign up for our newsletter
POPULAR AT PATHEOS Nonreligious
1

'Lamb of God' dead. We're fast...
The Freethinker
Related posts from According To Matthew