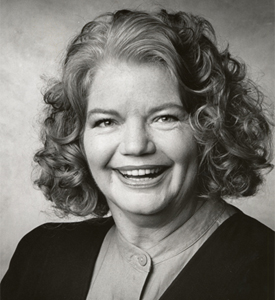 If you don’t know  who she was, go HERE to read some of her delightful quotes.

“I have been attacked by Rush Limbaugh on the air, an experience somewhat akin to being gummed by a newt. It doesn’t actually hurt, but it leaves you with slimy stuff on your ankle.”

She was a Texan — a Texas liberal! — with a loud mouth, a wickedly cynical pen, and a sense of humor and justice and love that made her … special.

She knew, and gently despised, the idiot George W. Bush (whom she called “Shrub”), and all the people he surrounded himself with.

“If ignorance ever goes to $40 a barrel, I want drillin’ rights on that man’s head.”

… and would have celebrated the election of Barack Obama.

She died of breast cancer at the age of 62. Way too young.

I have to wonder if she’d still be with us, if science and medicine had moved only a little bit faster at finding cures and treatments for her condition.

And I have to wonder if the reason it didn’t move faster was because people like Bush, and all the know-nothings and godders and foot-dragging fools throughout history slowed it down.

“Keep fightin’ for freedom and justice, beloveds, but don’t you forget to have fun doin’ it. Lord, let your laughter ring forth. Be outrageous,  ridicule the fraidy-cats, rejoice in all the oddities that freedom can produce. And when you get through kickin’ ass and celebratin’ the sheer joy of a good fight, be sure to tell those who come after how much fun it was.”

February 5, 2009 Happy 200th Birthday!
Recent Comments
0 | Leave a Comment
Browse Our Archives
get the latest from
Nonreligious
Sign up for our newsletter
POPULAR AT PATHEOS Nonreligious
1