The Goodness of Atheism 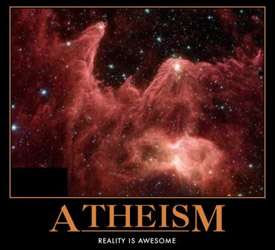 I got one of those Nigerian email scams. I’d guess it was about number 50, or maybe it was 75.

I’ve been thinking for several days about two very different views of atheism. One is from the godder side, where atheists are consciously evil, and want to hurt people and destroy things. The other …

Yeah, the whole thing is in capital letters. I’ll spare you by translating it into something less shouty. I’m leaving in the typographical errors and misspellings, but I’m fixing the weird line breaks and large number of extra spaces sprinkled throughout.

It is by the grace of god that i received christ, knowing the truth and the truth has set me free. Having known the truth, i had no choice than to do what is lawful and right in the sight of god for eternal life and in the sight of man for witness of god’s mercy and glory upon my life.

I am mrs. Rose burrow from united kingdom. I am single to frank burrow who worked with chevron/texaco in nigeria for twenty years before he died in the year 2002 without any kid. We were married for twenty-seven years without a child, he died during the cardiac arrest which he was held hostage and slain to death by protesting youths of there region in edo state. Before his death we were both born again christians.

Not only was he held hostage, he was slain to death. By protesting youths. Damn, that’s harsh.

I have since lost my ability to talk and my doctors have told me that i have only a few months to live. Since his death i decided not to re-marry. When my late husband was alive he deposited the sum of (three million us dollars) with a known bank in nigeria and now the management of the bank just wrote me to come forward to receive the money or rather issue a letter of authorisation to somebody to receive it on my behalf if i can not come over because of my condition at hand.

Whoa. Queen For A Day contestant here. First her husband was slain to death, now she’s lost the ability to talk, and to top it off, she’s dying. Worse, the bastards at the bank have demanded she come forward to get this $3 mil her husband acquired while working for Chevron/Texaco.

It is my last wish to see that this money is invested and at the end of every year distributed among charity organisation. And for your compesation, as soon as the money enters your account take 30% of the total money, while 70% will be for the work of god.

I took this decision because i know that there are alot of poor people suffering from different kind of disease and nobody to come to their aid. With god all things are possible.

As soon as i receive your reply i shall give you the contact of the bank were the money is been deposited. I will also issue you a letter of authority and certificate of claim that will prove you as the new beneficiary of this fund.

I await your urgent reply.

Mrs. Rose Burrow, or whoever she/he is, is a parasite. A con artist. A predator. She pitches this con to prey on the tender feelings – and greed – of Christians. If a million people get this email, and just one – say a retired widow in her 80s – is enough out of the mainstream to not know about the Nigerian scam, she might just bite on it.

You’d think that nobody would be stupid enough to do it, but I’ve known people who were either old enough or cloistered enough – say someone who listened only to Christian radio, Christian TV, Christian magazines – to be vulnerable to the scam.

Speaking of which, note the significant hook of the letter: Christianity.

The religious language is sweetness itself to a Christian, but poison to an atheist such as myself.

Why? Not because I’m evil, but because I’m GOOD. Good enough, at least, to be disgusted by people preying on the defenseless.

And that’s one of the main keys to atheism for me. It’s not about trying to hurt people, not about trying to rob them of their beliefs and faith and community. It’s about trying to stop parasites – not just “Rose Burrow,” but Jimmy Swaggart, Jim and Tammy Faye Bakker, Jim Jones, Ted Haggard, Benny Hinn, Jerry Falwell, Oral Roberts, Joseph Smith, and yes, even that non-Christian messiah of idiots, L. Ron Hubbard – from taking advantage of people who are weakened and vulnerable.

I’m an atheist because I want things to be real and true. I want society to be careful and caring.

Whether it’s “Rose Burrow” or the legion of other con-men, including the recent crop of liars and thieves who want public schools to teach their religion, creationism, to other people’s kids, I want them stopped.

The only way to do that, in my view, is to care about real things, and to spotlight the shepherds of the unreal. The liars and parasites and cowards of the religious con – the oldest con on the books – who really DO want to hurt others.

January 31, 2009 Molly Ivins Remembered
Recent Comments
0 | Leave a Comment
Browse Our Archives
get the latest from
Nonreligious
Sign up for our newsletter
POPULAR AT PATHEOS Nonreligious
1