I had my big mongo camera with me at Eschaton 2012, but I kept reminding myself I was there to learn, to speak, to mingle and meet. Which means there were plenty of people I didn’t get pictures of.

To my immense embarrassment, that means I have pics of almost none of the volunteers. Such as Seanna and Evan, who were the public face of the event for me. Seanna extended the invitation, Evan did the travel arrangements. Throughout the event, every time Seanna mentioned Evan and Far Horizons Travel, she repeatedly, comically, reminded us it was “the only atheist-run travel agency in Ottawa.”

But here are a FEW of the speakers and attendees:

Click a pic to see it on its own page, then click it AGAIN to see it big. And someday I’ll actually figure out how to put a rolling gallery in. No, really.

Russell Moore: Not Really a Hero
Roll to Disbelieve
Related posts from A Citizen of Earth 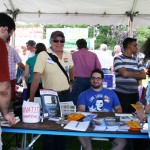 Nonreligious
Atheists at Albany Pride
A Citizen of Earth

Nonreligious
Sorry, Way Too Busy to Blog
A Citizen of Earth

Nonreligious
You Sleigh Me
A Citizen of Earth

Nonreligious
Boggled
A Citizen of Earth
TRENDING AT PATHEOS Nonreligious