Word is that Fred Phelps Sr., the founder of Westboro Baptist Church, is dying.

I’ve learned that my father, Fred Phelps, Sr., pastor of the “God Hates Fags” Westboro Baptist Church, was ex-communicated from the “church” back in August of 2013. He is now on the edge of death at Midland Hospice house in Topeka, Kansas.

I’m not sure how I feel about this. Terribly ironic that his devotion to his god ends this way. Destroyed by the monster he made.

I feel sad for all the hurt he’s caused so many. I feel sad for those who will lose the grandfather and father they loved. And I’m bitterly angry that my family is blocking the family members who left from seeing him, and saying their good-byes.

There’s been a lot of talk about protesting at his funeral, and I approve of the sentiment but not the action.

Funerals are private family affairs, in my view, and I’d never show up at one to cause some kind of fuss. Of course I can’t advise the ones who have been directly harmed by his funeral protests; it may be those people — the families of deceased gays and dead soldiers — have every right to come back at him and his family in like manner. But I sort of hope they don’t, and I don’t think any of the rest of us should.

I want to say clearly that I limit this sentiment of non-interference, non-commentary, to the funeral alone. The shitty human being who created the cesspit that has now cast him out — Ha! Apparently some turds are so bad even the toilet rejects them! — is fair game for replies in every other avenue of speech. Whatever general “don’t speak ill of the dead” respect one might normally owe a person simply doesn’t apply in some cases, and this is one of those cases. (For instance, I don’t mind saying the world will be better off without this creepy, hateful bastard in it. )

His public actions and attitudes SHOULD be replied to … but in public places (Twitter, Facebook, TV interviews, talk shows, podcasts, blogs!) rather than in the private space of a funeral. The fact that he gleefully breached the privacy of so many during a time of grieving was one of the things we so hated about him, wasn’t it?

I have a hard time imagining anyone actually loving him, and that seems to be borne out by reports that he’s dying alone in a hospice, unattended by family members. But however they want to play it, the time before and after his death is his family’s private choice. 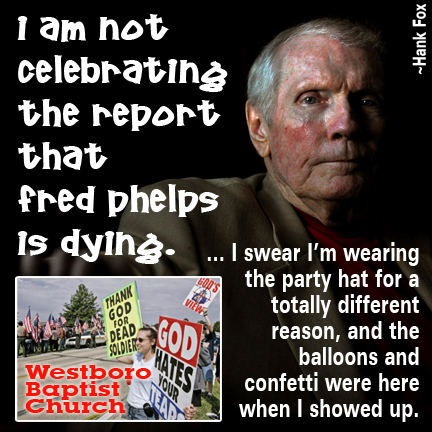 March 22, 2014 Beta Culture: A Citizen of Earth
Recent Comments
0 | Leave a Comment
Browse Our Archives
get the latest from
Nonreligious
Sign up for our newsletter
POPULAR AT PATHEOS Nonreligious
1