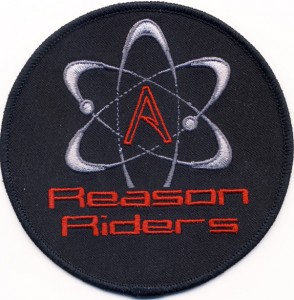 If you are 1), an atheist, and 2) ride a motorcycle, you seriously need to join and support Reason Riders.

I first wrote about the idea of an atheist motorcycle club a little more than two years ago. I tinkered up a rough logo and a name — Reason Riders — and just dropped it out there.

Pierino Walker picked up on it soon after, redesigning the logo and turning it into patches for his motorcycle jacket. He sent me a couple, and supplied them for fellow riders in Northern California and elsewhere.

Brian Christian, fellow rider in Buckeye, Arizona, joined in, and the two are now co-founders, stepping up the pace to take the idea national.

Christian has a Meetup group — Reason Riders of Western Arizona — and hosts road trips for enthusiasts in his state. Walker rides in northern California.

Apparently it’s common for riders to be known either by their last name or a road name. As the leader of a group of atheist motorcycle riders, and ironically named Christian, Brian’s riders have given him the road name “Bishop.” So: 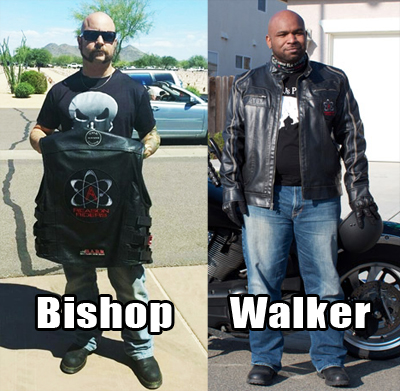 There is a Reason Riders Facebook page, where riders post announcements of cross-country rides and pics of bikes and friends, as well as thoughts on atheism, religion, life and such.

Anyone interested in joining — either as riders or as organizers for local chapters — can contact the two founders (who are also local-chapter Presidents) either through the Facebook page or via email:

There will be additional Reason Riders swag coming soon, but meanwhile you can order the large back patches, shown below, from Bishop.

Look for a near-future post on the group’s Mission Statement, but don’t let that stop you from RIGHT NOW becoming a part of the world’s only, first-ever Godless Atheist Motorcycle Group.

Side Note: Speaking of riding clubs, Bishop clued me in to an important point that I wasn’t aware of, but that riders thinking about joining in — or forming a chapter in their home territory — should know. There is a neighborly etiquette regarding already-established riding groups and motorcycle clubs in each area. Anyone forming a group in their area will want to introduce themselves to the local clubs, maybe take a few rides with them, before leaping out onto the road with the new patch. It’s an important issue with all the large clubs, and not one to be taken lightly if we want Reason Riders to find its own place out there. 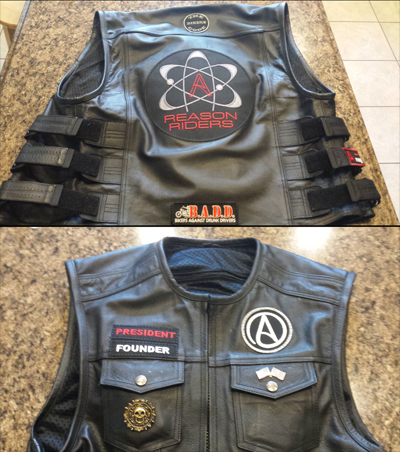 Come Meet the Growing Ranks of...
Roll to Disbelieve
Related posts from A Citizen of Earth