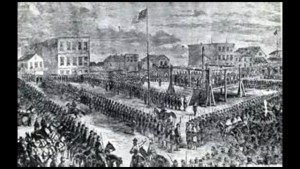 This picture was shared on Facebook with the caption, “Americas (sic) largest mass hanging of Indians.”

Hey, I’m in. I’m on board. The LEAST you can say about the alleged incident is that it deserves to echo through history as one of our most shameful moments. It deserves to be remembered, reflected upon, regretted.

As a compassionate, reasoning being — or so I like to think of myself — my first impulse is to find out more. This is something that needs to be a part of my thinking, right?

But … no further information is attached. No link. No explanation. No date. No location. Nothing.

I can’t tell whether this incident was perpetrated by forces of the newly-minted United States, by the pre-Revolutionary British, by Mexico, France, Texas, some pre-1776 state, or just generic “white people” acting on their own. I can’t tell whether it was even on this continent.  Might it have been India? Australia? Feudal Japan? China?

We don’t know. Not only do we not know, we can’t even guess. (Okay, from the architecture, I’m going to wager it’s probably not Japan or China.)

I’d think it would be obvious why this pisses me off, but I’ll tell you anyway:

In my mind, there’s a stark difference between INFORMING and MANIPULATING.

Informing is when you introduce a subject and tell me the full details. Or at least give me a start and then point me to somewhere I can (without, say, flying to England and digging around in historical accounts) find out the whole story.

Manipulating is when you project a knee-jerk emotional appeal with NO FURTHER INFORMATION.

Here’s the pisser: I’M ALREADY SYMPATHETIC TO THE MESSAGE. I’m on the “this is truly terrible” team. I don’t need to be manipulated, I need to be informed. He who informs me is on my team, he who manipulates me is not.

I’m willing to do a little research to find things out for myself, but it would be peachy if the original assertion contained SOME sort of clue as to where or when to start looking.

But whoever posted the thing didn’t do that. Is it that they couldn’t be bothered? That it was enough to rile people up in righteous anger? Was this aimed at evoking pure emotion, with no action or understanding necessary?

Was it meant only to inspire the lame-ass conclusion that White People Are Evil? Because THAT conclusion I’m  not on board with. It’s as racist as any other race-related generalization.

Actually, I have no trouble believing this act happened, and was carried out by “Americans.” But I can’t AUTOMATICALLY place that blame any more than I can automatically blame fresh graffiti on my fence on the first random teenager who walks by.

In both cases, you have to KNOW.

Projecting an emotional message at me, a message which I am already inclined to sympathetically consider, but which contains zero facts, is either the act of a careless idiot, or someone deliberately manipulating his/her audience — me. Either way, it’s a betrayal of the faculty of careful thought and reason I like to think sets me apart — sets US apart — from those people who make up the crazy, excitable rabble who so vividly fill the ranks of the teabagger movement.

March 12, 2016 Saying Goodbye to the 100-Year-Old Man
Recent Comments
0 | Leave a Comment
Browse Our Archives
get the latest from
Nonreligious
Sign up for our newsletter
POPULAR AT PATHEOS Nonreligious
1

Nonreligious
Beta Culture: Honoring the Fallen ... of Science
A Citizen of Earth
TRENDING AT PATHEOS Nonreligious