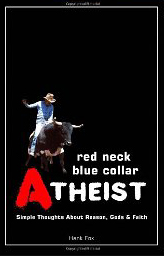 Red Neck, Blue Collar, Atheist – Simple Thoughts About Reason, Gods and Faith follows in the footsteps of recent best-sellers such as Christopher Hitchens’ God is Not Great, Richard Dawkins’ The God Delusion, and Sam Harris’ The End of Faith.

Whereas Dawkins, Hitchens and Harris have written mainly about the rational basis, the WHY of atheism, this book looks at the HOW – how it feels, how it works, from the inside. Coming from a writer who grew up in Texas and worked as a real cowboy and draft horse teamster (the cover picture even shows the author riding a bull!), as well as a carpenter, roofer and truck driver, the book is based on decades of examining the process in his own mind as he moved from Christianity to atheism. Putting it simply, here are some of the things an atheist might think, and the way he or she might think them.

More than once called a master of metaphor in the blogosphere, author Hank Fox tackles the subject of atheism with subtle humor and a friendly, informal tone, in two dozen chapters with names like Sundae Worship, The Parable of the M&Ms, Batman Almighty, The Wellspring of the Gods, Sucking Up to the Virgin Mary, The Evidence of True Things, The Headwaters of Reality, Hello Mr. Death, and Saying Goodbye to Gods.

Largely aimed at young adults, especially those from religious backgrounds and new to thinking about atheism and freethought, this book will also provide ammunition for those of a more intellectual bent faced with the necessity of explaining atheism in simple terms to friends and relatives.

Best of all, the book focuses not just on the negatives of religion, but on the positives of atheism – the freedom and mental clarity for individuals, but also the hopeful future for our entire world as we proceed with a social revolution already in progress.