On the Structure of Infinite Intelligence

On the Structure of Infinite Intelligence July 31, 2017 Aidan Kelly

As far as I know, Thomas Aquinas was to first to begin thinking about this kind of problem. I suspect that, before him, no one was able to formulate such a question, let alone begin the answer it.

He was thinking about angels, more specifically about what we can deduce about the nature of intelligent nonphysical beings. He could see that, at minimum, physical existence requires existing at a physical location. We can tell two absolutely identical things apart simply because they are in different places. Since nonphysical beings can have no physical location, they cannot be distinguished in that way. He could therefore see that, if two angels have absolutely identical characteristics, they would be the same angel, not two angels. This was a foreshadowing of Pauli’s Exclusion Principle, that if two particles have identical characteristics, they are the same particle.

Aquinas was certainly assuming that angelic existence takes up time, perhaps unending time. One can wonder how Wheeler’s discovery that “Time is not primordial” would affect that notion. Also, since particles are quanta (or made up of quanta), they also exist in the form of pure energy. Energy certainly does exist, but not in a physical form, because it has no physical location, until it is observed by a means that causes it to manifest as a particle. Energy would thus seem to be intermediate between physical and nonphysical existence.

This is an interesting concept. One can suppose that there be may be many more than just one angel for all of humanity. Suppose we each have a Guardian Angel. The Guardian Angels can be distinguished from one another by their being attached to us creatures who do have physical locations. However, all the Guardian Angels would collectively be Aquinas’ Angel1. One might ask, Are they actually many angels? Or actually only one angel? The answer is, Both. Our human distinction between One and Many simply does not apply to the infinite. Likewise, the old question about whether angels are separate from God or part of God has to be answered, They’re both.

There is another way to look at this question. In my own Awakening at age 14, I felt myself to be an integral part of a vast, compassionate consciousness, yet I was also paradoxically still me, myself, at the same time. If what I was experiencing was my Guardian Angel, the angel’s consciousness was probably similar, in being simultaneously a conscious person with a very specific personality and yet part of a vaster intelligence, and so on.

Another approach is to ask, If the ultimate reality is an infinite Compassionate Person, what can we humans know about Him/Her/Them? (Remember, the infinite is both One and Many.) As humans, we obviously cannot have infinite knowledge about that Person,  but we do have a little, we think. Is what we know correct? How much does it amount to?

Suppose we call that amount A. What percentage of that infinite knowledge do we have? For any A, no matter how big, as a percentage of infinity, A approaches asymptotically to zero. It never becomes zero, because we do know a little, but what we know is infinitesimal. So we could never under our own power arrive at any kind of accurate concept about that infinite Person or about what He/She/They might be up to.

Is there any way we could know more about that person and have it be good information, as far as it goes? Yes, if that Person tells us as much as we can understand about who They are and what She wants us to do. But are we ever told all that? Well, all the major religious traditions of the world insist that we are, that there have been and always will be gifted persons who function as “prophets,” that is, as receivers and transmitters of just that sort of information.  (You may not think that concept is very believable, but you should not be closedminded and just dismiss it out of hand. Please do not be guilty of “contempt before investigation.”)

We certainly have the need and the right to evaluate the quality of any prophet, that is, decide whether he or she is passing on good information, but let us first look again toward the ultimate source of that information. Here we have an infinite Person with infinite knowledge trying to decide what to tell us, how much to tell us, and how to tell us. He/She /They obviously have to be very selective in deciding on information that will be overall at least analogous to the totality of knowledge. Suppose that Person gives this packet of information to the topmost angel in the chain of command—not that there is a topmost one—and suppose we call it Angel-sub-Aleph-Null (I’ll explain that term later). That angel passes the information to the angel on the next rung down the ladder (during which the information necessarily becomes less comprehensive), who passes it down to the next angel, and so on, with the information shrinking all the way, until it reaches the Angel of Humanity, who is collectively all our individual angels, who then try to get the attention of each of us and get us to listen. (It’s rather like a chain of stepdown transformers.)

The fact is, some people listen better than others. Another fact is, all humans are fallible. We have to suppose that even the most talented prophets cannot get all the information straight. The Person is probably pushing the limits on how much He/She/They hope we can understand anyway. So no matter how thoroughly a prophet may listen, or how clearly he or she may explain, there will inherently be some errors in transmission, and always many humans who simply do not understand the message; so then the Person will try again. And if we assume the Person is compassionate, then it follows that He/She/They will never stop trying.

One trait of all such messages is they that largely consist of instructions. These tend to fall into two categories. One is, “Please do this; it will be good for you.” The other is, “Please don’t do that; you’ll hurt yourself.” (There are some other varieties, but these seem to be the most likely to have been garbled in transmission.) The instructions are for our benefit; the Gods don’t need them.

Now, with all this, please do not think the messages are coming from outer space. They come from within us, which is where the Gods live. That’s a different line of thought.

Also, be aware that the angels exist for our benefit, not we for theirs. We do tend to get that backwards.

Another old question is whether the Gods have bodies. Yes, they do. We are their bodies. That’s why they created us.

How about, do I think I am a prophet? Yes, I reluctantly do. (Remember, in the stories in the scriptures, what a prophet usually says first is, “Oh, Lord, do I have to?”) I prefer to call myself a poet, but that is actually a fine distinction. I get the messages from my angel, whom I generally think of as the Muse. I pass them on as best I can. I don’t expect anyone to pay much attention, though I do hope. I put my pants on one leg at a time, chop wood, haul water, try to keep myself in a fit spiritual condition, and try to follow as many of the instructions as I can, at least the ones that make sense to me. Doesn’t sound very glamorous, does it? 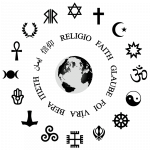 August 5, 2017 Our Experiment in Religious Engineering
Recent Comments
0 | Leave a Comment
"I think this is lovely <3"
M.J. All the Prophets Say
"Reading this in 2021. Wondering if, after nearly a decade, how much of this still ..."
Lady Tam Li Hua What Is a Witch?
"Aidan, it's been two years. Are you still with us?"
Baruch Dreamstalker An Overview of My Life and ..."
"where's part four!?"
rainaelf A History of the Craft in ..."
Browse Our Archives
get the latest from
Pagan
Sign up for our newsletter
POPULAR AT PATHEOS Pagan
1

Pagan
As If the Earth Were Hollow
Aidan Kelly: Including Paganism

Pagan
How Many Angels?
Aidan Kelly: Including Paganism

Pagan
Announcing: The Road of Excess: Part I, To...
Aidan Kelly: Including Paganism
TRENDING AT PATHEOS Pagan