Rethinking “Sour Grapes”: A Humanist Reframing of Failure and Failures 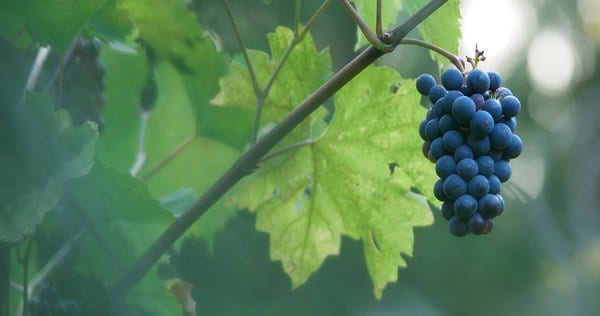 Let’s begin with a story. One of the most misunderstood Aesop’s fables is now also a common expression in our culture: namely, having a case of “sour grapes,” which we use to dismiss others as simply envious of one’s good fortune.

This Aesop’s fable can certainly be spun in that familiar way–and if you’ve read any version in a children’s story book, you’ve probably encountered just such a heavy-handed lesson. Here’s one common iteration, from the Library of Congress:

The Fox and the Grapes

A Fox one day spied a beautiful bunch of ripe grapes hanging from a vine trained along the branches of a tree. The grapes seemed ready to burst with juice, and the Fox’s mouth watered as he gazed longingly at them.

The bunch hung from a high branch, and the Fox had to jump for it. The first time he jumped he missed it by a long way. So he walked off a short distance and took a running leap at it, only to fall short once more. Again and again he tried, but in vain.

Now he sat down and looked at the grapes in disgust.

“What a fool I am,” he said. “Here I am wearing myself out to get a bunch of sour grapes that are not worth gaping for.”

And off he walked very, very scornfully.

There are many who pretend to despise and belittle that which is beyond their reach.

Well, let’s take another for comparison. This is from George Fyler Townsend’s seminal 1867 translation, which told the stories simply enough but often added a succinct moral to the ending–something not present in Aesop’s own:

The Fox and the Grapes

A famished Fox saw some clusters of ripe black grapes hanging from a trellised vine. She resorted to all her tricks to get at them, but wearied herself in vain, for she could not reach them. At last she turned away, hiding her disappointment and saying: “The Grapes are sour, and not ripe as I thought.”

No, I’m not cutting it off early. There is no moral added in this version, despite others in Townsend’s volume containing such additions–and therein lies the fascinating tension underlying our contemporary use of “sour grapes.”

Because there are two ways to read the original: Yes, as later children’s versions play up, you can read the Fox as a miserable rotter because he did not get what he wanted. However, in the simpler version, the version closest to Aesop’s own, Fox has simply found a way to recover from disappointment and move on. There is no self-hatred, no “what a fool I am!”–and no ongoing malevolence, no chip on the shoulder like the other Fox who walks away “very, very scornfully.”

What might these differences reflect? What might they suggest about the way our culture responds to both success and failure?

In the former tale, the Fox becomes contemptible because he’s acting like a bitter, spiteful loser. Likewise, when people fling the accusation, “It’s all just a case of sour grapes,” at someone pointing out flaws in a system or outcome, the phrase is meant dismissively. It’s intended to provoke. It’s striving, furthermore, to shame and to taunt. Your position doesn’t matter, this expression suggests, because it’s the position of a loser. Shut up and accept your loss, our use of “sour grapes” proclaims.

But what if “sour grapes” were understood through the latter interpretation? What if we instead saw it as a healthy reframing tool, a private way of reminding ourselves that there is more to life than what can be found on a single vine, in a single encounter?

What kind of society could we build on the practice of such acceptance?

Who Are You Outside of What You Do?

One of the most exciting things on offer in many forms of Christianity is the promise that even people with quiet, plodding lives are divinely imbued with invigorating purpose. Your life might look dull on the surface, the claim goes; your suffering might appear useless–but “extraordinary things” will happen for those who live even the most seemingly mundane and grinding Christian lives with the utmost integrity.

Likewise, in the secular world, you’ll find whole industries selling similar: the extraordinary Youness of You.

But how’s that working out for us, really? It’s quite an addictive thing, this need to feel exceptional; that desire to be reminded on the regular of how extraordinary our journeys are. And just as with any addiction, the rush of any given hit is often followed by an aching lull, a desperate questing for the next.

Which… creates a lot of emptiness. A lot of hunger for life to be more than it is.

A great many of us, then, are living out that “sour grapes” fable on a routine basis: always reaching for a “better” condition that remains firmly out of reach.

And what does that do for us as a collective? Well, a culture in which we regard those who do not attain that better condition as bitter losers is one that fosters derision towards others. Our world quickly becomes full of envious people, and surely these people would only find it unbearable if you succeeded where they failed. Quite logically, then, these toxically envious people–not the successes, never the successes in the socioeconomic rat-race!–must be the ones keeping you down.

But what if we collectively developed a healthier scepticism about that “better” condition in the first place? The one always just out of reach? What if we modelled for each other greater gratitude for our present moments, and what we have right now?

I touched on this in my last essay, when reflecting on what a Venezuelan friend taught me about a different role for dreams amid hardship. So often, the North American model for success is predicated on “I was suffering from poverty/disease/violence but I had a dream so I clawed my way out of my circumstances to reach it!”

But not everyone can make it out, and then not everyone who can make it out does–especially those who don’t want to leave their loved ones behind. And this makes for a depressingly skewed notion of what it means to live a good life, while also inviting us to look at those who didn’t live up to “the Dream” as the aforementioned losers–with all the implications this has for how we navigate politics, and vote.

Alternatives exist, of course, but I find them more often on sites like Humans of Bombay and among communities of modest means here. In the former, sure, you’ll find survival stories of the most extraordinary nature… but also stories from people whose entire lives were spent selling tea, fabric, or basic meals in a hole in the wall. Maybe they’ll have children they proudly saw off to school with their carefully accrued meagre earnings. But maybe they won’t. Maybe they’ll have lost the love of their life and now only have their work to keep going. And yet, maybe they’ll be contented all the same.

But their disappointment is often joined with something more–something that the Fox does, too, in Townsend’s translation: The strength to pick themselves up. The wisdom to reason their way out of pining over what’s been lost. The courage to press on.

The Danger of the Pendulum

To be clear, though, I’m not suggesting we should swing to the other side of the pendulum, and start celebrating being discouraged. We especially shouldn’t go around telling people how to feel while they’re grieving. There are enough people who feel that they shouldn’t be ambitious, and who give up on their dreams too soon. Let’s not add to that number from anxious desires to sweep away others’ discomfort.

Nevertheless, there are ways to celebrate striving for incredible dreams without suggesting that failure to reach the fruit of a single vine somehow destroys our moral character, and makes us otherwise worthy of societal contempt.

This perspective-shifting becomes especially important, too, when we mark the gender shift in those two versions of “The Fox and the Grapes.” Did you notice? Because, wow, does the masculinity of our first Fox ever resonate with a toxic belief that a man “without”–without a good job, without a family, without a partner, without money–is no man at all. That he’ll just become a bitter loner ready to explode. That he needs the fruit of that vine to become a citizen of value. That if people don’t want to be responsible for his ensuing violence, they should probably make sure he gets the fruit of that vine!

A lot of people have been wounded by this belief–which is quite devastatingly reinforced by men and women alike.

A lot of lives worthy on their own merits have been lessened by this belief, too.

And unfortunately, the blame here lies as much on secular stories as it does on spiritual promises that we each have it within us to be “extraordinary.” Western society has too relied upon the wrong interpretation of “sour grapes”: the one, that is, ascribing lesser moral character to those who do not achieve what they set out to do.

Amid all the violence perpetrated from outsize notions of personal entitlement, wherein failure to achieve a specific goal somehow justifies a moral decline…

Maybe it’s time we returned to the less heavy-handed version of “The Fox and the Grapes.” To secular storytelling, that is, in which what we already have will often have to be enough; and where–since our moral worth is not at all attached to what we do not have–there is absolutely no shame in walking away from any failure to obtain more. 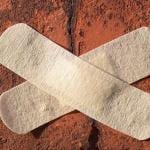 November 9, 2019
The Context of Our Suffering: Lessons from the Wounded in Colombia
Next Post 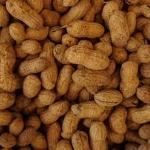 November 17, 2019 Allergy Intolerance: A Lesson in Being Wrong as a Humanist
Recent Comments
2 Comments | Leave a Comment
"Thanks so much for being present with the material, HCI_Guy! Hope the rest of your ..."
M L Clark Moving Beyond Our Information Silos: A ..."
"Thanks again, M. L. Clark, for the wonderful talk!"
HCI_Guy Moving Beyond Our Information Silos: A ..."
"Like the "four stage strategy" from "Yes, Minister"https://youtu.be/nSXIetP5iak"
Pam In It for the Long Haul: ..."
"Exceptionally well researched article ML. I think there are probably many paths to social progress ..."
Dr. Marty Shoemaker In It for the Long Haul: ..."
Browse Our Archives
get the latest from
Another White Atheist in Colombia
Sign up for our newsletter
POPULAR AT PATHEOS Nonreligious
1 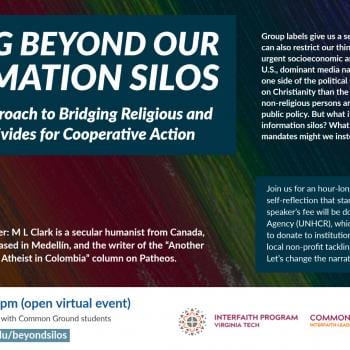 Nonreligious
Moving Beyond Our Information Silos: A Humanist Speech...
Another White Atheist in Colombia 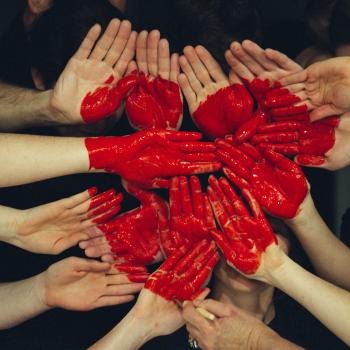 Nonreligious
In It for the Long Haul: Humanism after...
Another White Atheist in Colombia 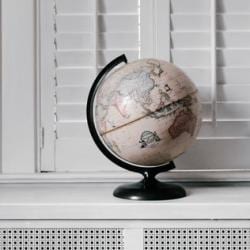 Nonreligious
What a Fringe Theorist Taught Me about Intuition...
Another White Atheist in Colombia 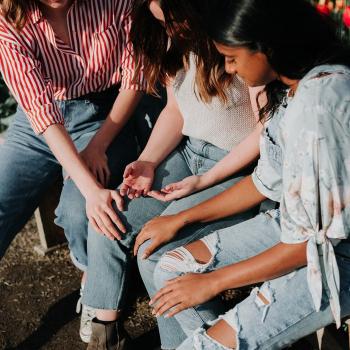 Nonreligious
On "Secular Prayer": Bargaining Our Way to Better...
Another White Atheist in Colombia
TRENDING AT PATHEOS Nonreligious