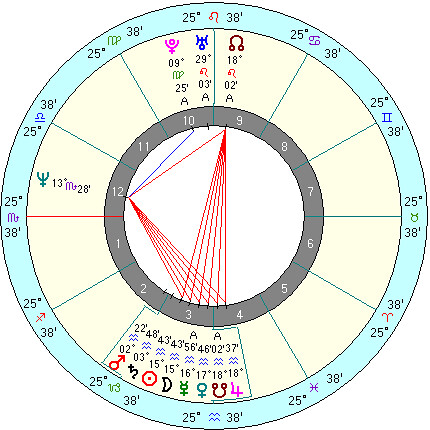 Although I have done several readings for people born in 1962 with five or six planets in Aquarius and knew that this was a strong Aquariuan time, I did not realize that on February 5, 1962 there was an astonishing seven planets including a New Moon (with a conjunction to the South Node) tightly aligned in Aquarius. The “Time Wave Zero 2012” newsgroup that I’m a member of posted a link to this chart of this event. It’s really quite astonishing!

Any time you have a concentration of planets in one sign you have a personality with a tremendous amount of focus who is not well-balanced. Aquarius is a sign of the intellect and based in reason, and an unadulterated dose of Aquarius in the chart gives the individual a Spock-like quality. The urge for individuation in the sign of Aquarius can bring an unusual personality bordering on the bizarre, depending on the ascendant which describes the persona and appearance. We would expect them to be open minded and free spirits, passionate about social justice but with more difficulty in personal relationships due to the intense need for autonomy of the Aquarian influence.

Everyone born during this stellium has Neptune in Scorpio squaring the Aquarius planets – the
sign of sex, drugs and rock and roll. Also the blurring of identity, confusion over boundaries. Obviously, different ascendants and house structures will bring a variety of life experiences to these people.

Eddie Izzard was born on February 7, and his chart has six planets in Aquarius (all but the Moon which is in Pisces and therefore lends a strong water/emotional signature to the chart). Eddie’s comedy takes the Aquarian tendency for the eccentric to the extreme: he is known for its surreal and hard to understand style, his bizarre sense of humor and his rambling stream-of-consciousness musings. He is a known cross-dresser (the Aquarius archetype tends to be rather androgynous)

Jennifer Jason Leigh was born on February 5, 1962 with all six planets plus the Moon in Aquarius. She is not as openly bizarre as Eddie Izzard, but the characters she plays are always pretty weird. Evidently she told Ron Howard when auditioning for the film “Backdraft,” “The only role I want to play is the fire.”

On the other hand, Clint Black was also born that day and appears perfectly normal. Taurus rising perhaps? He exploded suddenly into the country music scene in a very Aquarian way, out of nowhere, with a completely new style that had not been seen in country music until then. USA Today wrote, “There may never have been a country performer who has created a bigger stir right out of the box.”

It’s an interesting anecdote that Jeanne Dixon predicted that the Antichrist would be born February 5, 1962 at around 7 am, right at the heart of this stellium.

August 16, 2007 Astrology in the Halls of Congress?
Browse Our Archives
get the latest from
New Visions
Sign up for our newsletter
POPULAR AT PATHEOS New Visions
1

Swayed In All Directions
I doze in the hammock, and this book of voices from long...
view all New Visions blogs
Copyright 2008-2020, Patheos. All rights reserved.